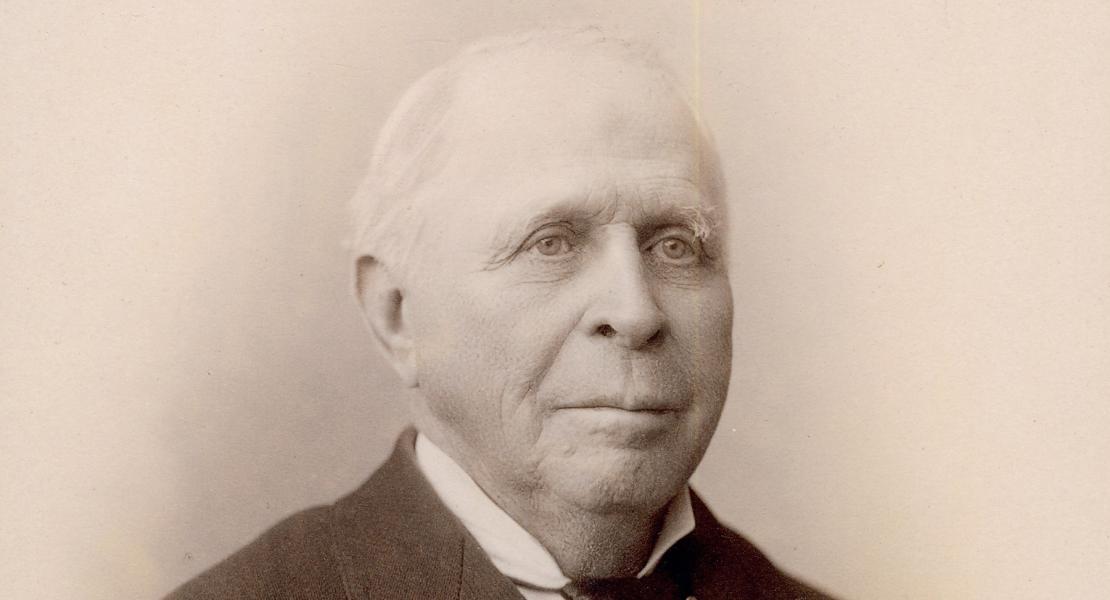 James Overton Broadhead was born on May 29, 1819, in Charlottesville, Virginia, the oldest child of Achilles and Mary Broadhead. His uncle, Frank Carr, tutored him in classical languages, and he attended high school in Albemarle County before taking courses at the University of Virginia for one year in 1835. Broadhead accepted a teaching position at a private school in Baltimore for a year before deciding in 1837 to move to St. Charles County, Missouri. It was his good fortune at this time to be befriended by Edward Bates, who employed him as a tutor for three years in his home, a position that gave Broadhead the opportunity to read law in preparation for his acceptance into the bar in 1842.

Upon receiving his license to practice law, Broadhead moved to Bowling Green in Pike County, Missouri, residing there until 1859. In 1845 he was elected to serve as a delegate to the state constitutional convention, and as a Whig he probably worked for the reapportionment of county representation in the General Assembly. Many Democrats also favored this change, which failed to become law when Missouri voters rejected the proposed new constitution.

After his service in the convention, the people of Pike County elected Broadhead to the Missouri House of Representatives, where he served in 1846 and 1847, and to the Missouri Senate, where he served from 1850 to 1853. In the General Assembly, Broadhead was a partisan politician, quick to take advantage of divisions in the Democratic Party. In 1851 he helped elect Henry S. Geyer, the first Whig from Missouri in the US Senate. After the dissolution of the Whig Party in the mid-1850s, Broadhead first became a member of the nativist American Party and afterward a member of the Democratic Party.

After moving to St. Louis, Broadhead formed a law partnership with Fidelia C. Sharpe, with whom he practiced for many years until Sharpe’s death. In 1861 Broadhead was elected as a delegate to the state convention called by Claiborne Fox Jackson and his supporters for the purpose of removing Missouri from the Union. However, the secessionists miscalculated, and all of the delegates sent by the people of Missouri to the convention opposed secession. Broadhead vigorously opposed secession and chaired the committee that recommended that the governor, lieutenant governor, secretary of state, and members of the General Assembly be replaced with men loyal to the Union.

During wartime Broadhead was named to a committee of safety established to protect Union interests in St. Louis. Early in 1861 the committee organized six military regiments and maintained a correspondence with prominent Union men throughout the state to coordinate their efforts. The committee also supported General Nathaniel Lyon’s breakup of Camp Jackson, where state militia forces mostly sympathetic to the Southern cause were encamped on the outskirts of St. Louis. That same year Broadhead was appointed US attorney for the eastern district of Missouri, a position that he resigned in 1863 when he was commissioned as a lieutenant colonel of volunteers and appointed provost marshal for Missouri, southern Iowa, Arkansas, Kansas, and the Indian Territory.

At the war’s end Broadhead vigorously opposed the ratification of a constitution drafted largely under Radical Republican influences, believing that many of its measures were too harsh. Resuming the practice of law, he represented clients in cases stemming from the war, railroad issues, and corporate and commercial questions. Before the US Supreme Court, Broadhead argued two important cases, one for the railroads and another for the Mormon Church against an act of Congress confiscating church property. He was successful in both cases.

In 1868 and 1872 Broadhead served as a delegate to the Democratic National Convention. In 1875 he represented St. Louis County at a state constitutional convention that replaced the 1865 constitution with a more conservative one. In 1876 he was appointed as a special prosecutor against the Whiskey Ring conspirators, who had illegally retained revenues from the excise tax on distillers, defrauding the federal government of thousands of dollars. In 1878 Broadhead was chosen first president of the American Bar Association.

Broadhead served in the US Congress between 1883 and 1885, during which time he was a member of a special commission to look into French spoliation claims against the US government. In this capacity he delivered a speech on the floor of the House supporting some of the French claims. In 1893 he became minister to Switzerland, a post he held until his resignation in 1897, after which he returned to St. Louis, where he died on August 7, 1898.

Broadhead, James O. “Early Events of the War in Missouri.” In War Papers and Personal Reminiscences, 1861–1865: Read before the Commandery of the State of Missouri, Military Order of the Loyal Legion of the United States. St. Louis: Becktold, 1892.