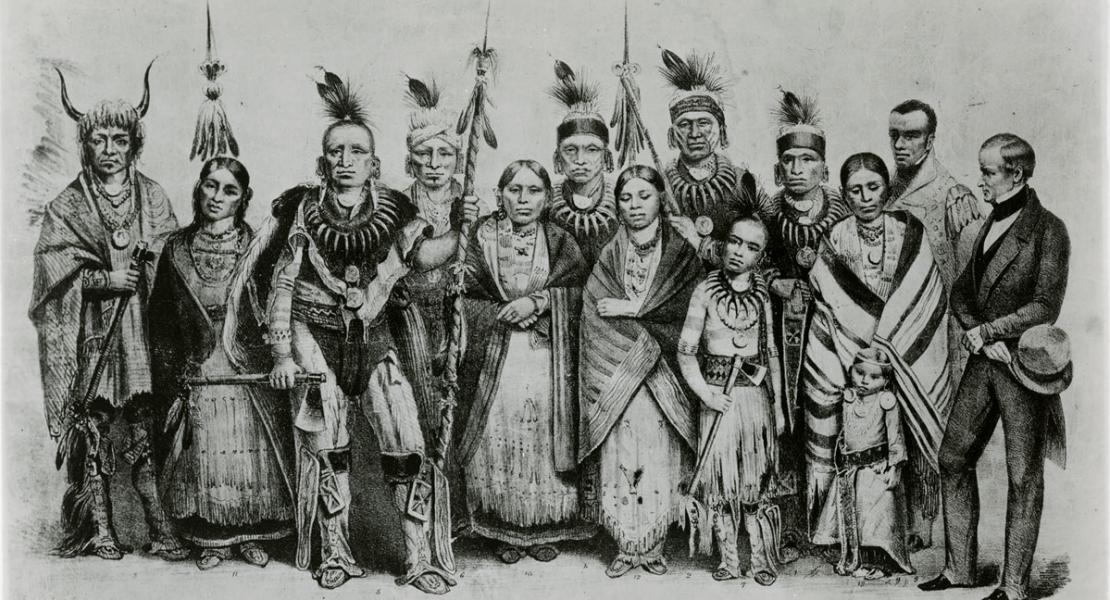 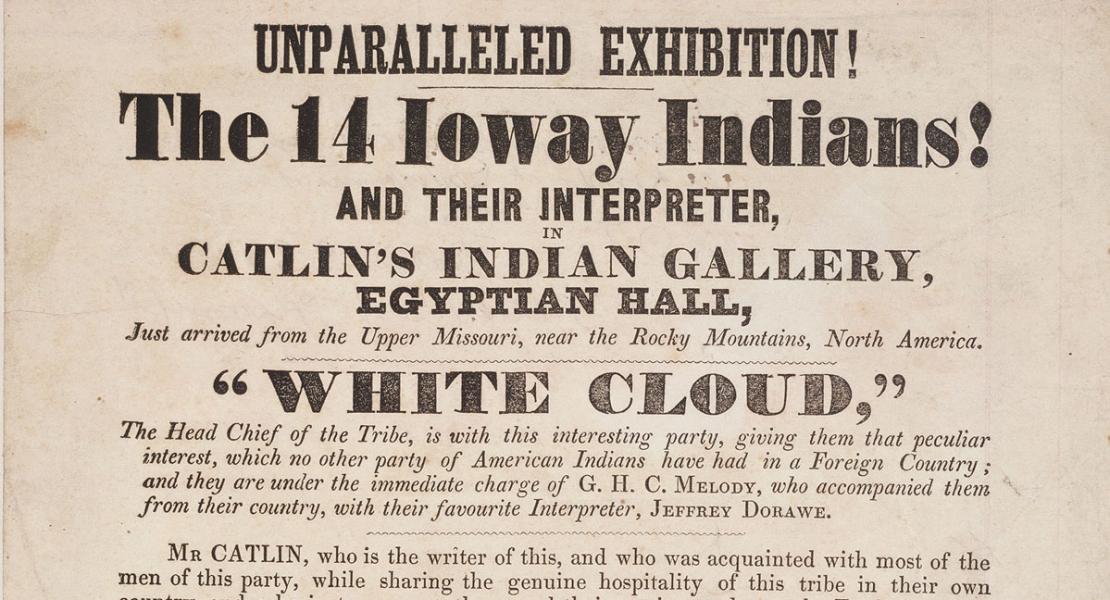 Jeffrey Deroine (pronounced Der-oh-NAY) defied many of the limitations placed on slaves in early nineteenth-century Missouri. He was able not only to become free, but to work as an employee of the US government, acting as a translator for the Ioway people. He also had the chance to travel to Europe for two years with a group of Ioways. While there, he met royalty and translated for the Ioways at public and private events. Deroine also became one of the few free people of color to own property in Missouri before the Civil War.

Because he was born a slave, the few details we know about Deroine’s life are vague and sometimes contradict each other. His Christian name appears in historical documents as Jeffrey, Geffre, Jeffrie, and Jefferson. His surname has been recorded as Derouin, Dorian, Doraway, Dorney, and De Roin. David Pollock Dobyns, a nineteenth-century newspaper editor from Holt County, Missouri, researched this problem and concluded that during his lifetime he was probably known to most people as Jeffrey Deroine.

Deroine was born in St. Louis on May 14, 1806. According to his longtime friend, the Indian agent Andrew S. Hughes, he was the son of a trader of French and Spanish ancestry and an African American woman. Because his mother was a slave, young Deroine became a slave at birth. He was raised in the home of Francis Deroin, from whom he took his surname and his Roman Catholic faith.

While still young, Deroine became the property of Joseph Robidoux, a trader and the founder of St. Joseph, Missouri. The nature of the relationship between Deroine and Robidoux is unclear. At least one historian has speculated that a member of the Robidoux family was the boy’s father. This is supported by a statement made in court documents and by the fact that the family continued to conduct land deals and other business with Deroine and his descendants even after his death.

In 1822, Rachel Camp, a woman who claimed to be Deroine’s grandmother, filed a freedom suit as the boy’s “next friend” in St. Louis Circuit Court. In legal terms, “next friend” usually refers to someone who appears in court to represent someone who does not have the legal capacity to act on his own behalf. Deroine was sixteen years old in 1822 and would have been unable to file a suit because he was still a minor. But Camp was able to sue for his freedom on his behalf, since the Missouri Territory had passed legislation in 1807 that allowed slaves to petition for their freedom in court. More than three hundred freedom suits reached the courts in St. Louis between 1814 and 1860, with the most famous being lawsuits filed by Dred and Harriet Scott against their owner Irene Emerson in 1846.

In their lawsuit, Deroine and Camp stated that Robidoux had beaten the boy so severely on October 8, 1820, that they had “despaired” for his life. The pair also claimed that Robidoux was, at the time of the filing, imprisoning Deroine against his will. Because Robidoux had allegedly mistreated his slave, Camp asked the court to set Deroine free and award him $1,000 in damages. But Robidoux used his wealth and his St. Louis business connections to prevent the suit from ever coming before a jury. As Hughes recounted years later, “Jeffrey was poor and [the] Robidoux Company was rich and the trial was kept off from year to year for many years, so that a trial was not had.”

Meanwhile, Deroine was forced to work for Robidoux as a trader on the Missouri River. Over the years he learned a great deal about the business of trading on the river, the geography of the region, and the Native people who lived there. Though Deroine was never able to read or write, he learned to speak a number of languages while working on the river. It was during this period of his life that he met Hughes and the Ioway headman Francis White Cloud.

The Ioways had experienced a great deal of trouble in their treaty negotiations with the United States, mainly due to unreliable interpreters. In 1830, Ioway leaders claimed that faulty translation during a council at Prairie du Chien on the upper Mississippi had led them to unknowingly cede the western third of the present-day state of Iowa to the United States. White Cloud and other Ioways contested the agreement until they signed the Platte Purchase Treaty seven years later.

Hughes and White Cloud met Deroine in the course of the business Robidoux did with the Ioways. They were impressed with Deroine’s ability to translate and asked Robidoux for permission to hire him as the Ioways’ official interpreter. The trader was reluctant to let his slave go, but agreed in March 1832 to allow a third party to buy Deroine’s freedom for $600. Deroine’s bill of sale and freedom does not identify his purchaser, but some believe that Hughes raised the necessary money, though White Cloud later claimed he had purchased Deroine’s freedom.

Even with Deroine’s freedom secured, it took more than a year for the Bureau of Indian Affairs to recognize him as an employee. The bureau’s official policy was not to employ slaves. Even though Deroine was in the field working with the Ioways, the bureau refused to pay him until they could prove his status as a freedman. Despite receiving written pleas from Hughes and his supervisor in St. Louis, superintendent of Indian Affairs William Clark, the office withheld Deroine’s wages. The matter was finally resolved in the fall of 1834 when Hughes and Clark sent commissioner Elbert Herring a certified copy of Robidoux’s 1832 bill of Deroine’s sale and freedom.

Deroine quickly settled into his new life with the Ioways. Hughes reported that by 1834 his interpreter had married into the tribe, with the interracial daughter of former Ioway agent Gabriel Vasques becoming his wife. There are also reports that state he was married to another Ioway woman named Su-See Baskette for a brief period of time in about 1837. Francis White Cloud may well have arranged this marriage for Deroine, as Baskette had been raised in his home.

During the years he worked as an interpreter, Deroine assisted the Ioways in several treaty negotiations with the US government. In 1836 he stood with his friend Francis White Cloud during meetings that led to the Platte Purchase Treaty, in which the Ioways gave up their right to the land that now makes up the Missouri counties of Atchison, Holt, Platte, Nodaway, and Buchanan.

Deroine and White Cloud enjoyed a close friendship that soon began to worry government officials. Some began to believe that the two men had too much control over the Ioway tribe. By 1841 the Ioways’ new Indian agent, William Richardson, had charged Deroine with illegally selling whiskey and conspiring with White Cloud to cheat some Ioways out of their annuity money. While these charges were never proved, Richardson used them as an excuse to ban Deroine from the Ioways’ reservation in 1842. However, the interpreter was able to keep the annual pension of $50 that the Ioways had awarded him as a token of their appreciation.

In the meantime, Deroine used his status as a free person to acquire land. He first squatted on a quarter section of land in Holt County just across the Missouri River from the Ioway reservation. This made him the first person of color to own rights to land in the county. William Banks, who wanted to build a trading post on the site with his partner John McIntosh, bought Deroine’s squatter’s rights for $600 in cash and merchandise and named the spot Jeffrey’s Point.

Deroine is best known for accompanying fourteen Ioways to Europe from 1844 to 1846. The troupe made the trip at the invitation of the American painter George Catlin. Catlin had met several Ioways in 1832 when he traveled from St. Louis on the steamboat Yellowstone on an eighteen-hundred-mile journey up the Missouri River. During that trip Catlin created 135 paintings of Native people. In the early 1840s he traveled to Europe with more than five hundred of his paintings. He first installed them as an art exhibition, but later added a group of Ojibwes to perform many of their dances and songs.

In 1844 the Ioways replaced the Ojibwes in Catlin’s show, traveling to England and France with the artist. During their tour, the Ioways not only performed for the public but also gave command performances for royalty such as Queen Victoria of Britain and King Louis Phillippe of France. In these interactions, Deroine was the voice of the Ioways, translating between them and their various audiences. The London Illustrated News noted that the Ioways’ appearance “in their romantic costume, armed with tomahawks and other warlike weapons, is very picturesque.” The paper also reported that Jeffrey Deroine “is a very intelligent man, speaking seven Indian languages, also French and English fluently.”

After his return to Missouri in the spring of 1846, Deroine seems to have faded from the spotlight. What little is known about the last years of his life comes from his will and a few other scattered documents. In his will Deroine listed two sons, Jesse and Bela (also called Beely), and a sister named Celeste. His will and the records of St. Ebenezer A.M.E. Church in St. Joseph indicate that he and his sons conducted real estate dealings with Joseph and Felix Robidoux. When Jeffrey Deroine died at the age of fifty-two in March 1859, Felix Robidoux was the executor of his estate. At the time of his death, Deroine owned property in St. Joseph, including a lot at Third and Antoine Street, five lots at Second and Robidoux Street, and 180 acres of land just north of the city limits. He left this land to his sons and gave a tract of land he owned in Holt County to his sister. Deroine was buried in Calvary Cemetery in St. Joseph. After the opening of Mount Olivet Cemetery in 1895, Calvary Cemetery fell into disrepair, and the graves were removed from it in the early twentieth century. While most remains were reburied in Mount Olivet, Deroine’s remains were misplaced during the move, and the location of his grave is presently unknown.

Slaves had few options in early nineteenth-century Missouri. Through a combination of talent, hard work, luck, and the help of others, Jeffrey Deroine overcame many of the restrictions placed on him by a slave-owning society, becoming a successful trader, interpreter, and property owner and going places and seeing things that few whites of his era experienced.