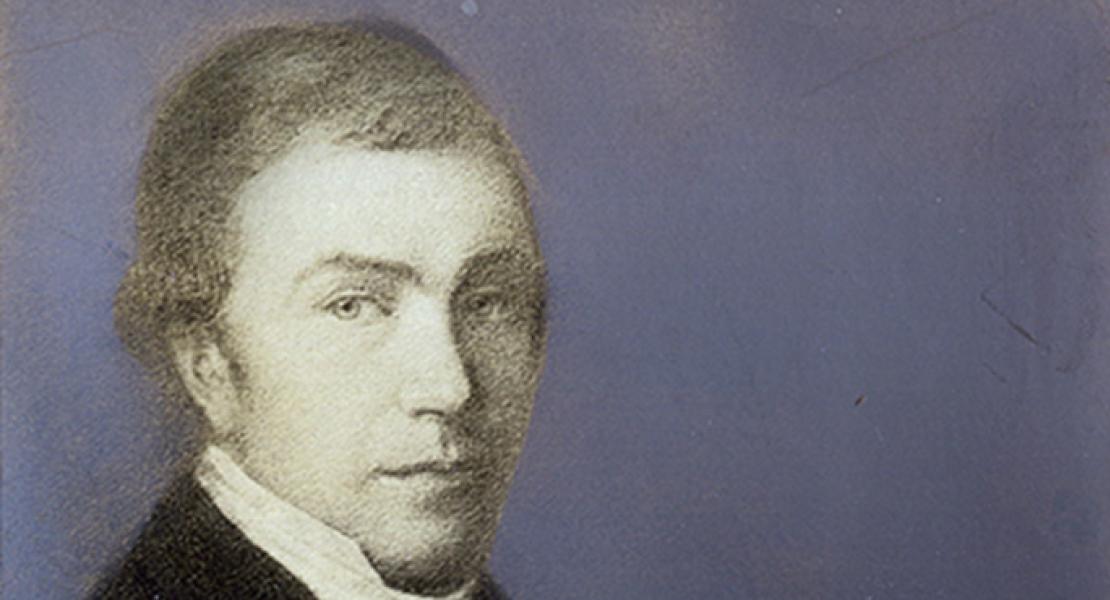 Isaac McCoy was born on June 13, 1784, in Fayette County, Pennsylvania. At the age of six, he traveled with his family to the vicinity of Louisville, Kentucky, where his father, William, served as an itinerant preacher. The younger McCoy received no formal education, but wishing to become a minister like his father, he learned to read and write through religious instruction at home. In 1803 he married Christiana Polke and moved to Vincennes, Indiana. For several years he had no opportunity to preach and served as the town’s jailer until he received his first call in 1810 from the Maria Creek Baptist Church.

In 1816 McCoy gained a one-year appointment from the Baptist Board of Foreign Missions to minister to both whites and Native Americans in the West. Focusing most of his efforts on the region’s Native Americans, he founded a mission and school among the Miami tribe in western Indiana. His purpose was to provide Indigenous children with free instruction in agriculture, religion, and other “civilizing” customs. While engaged in this enterprise, McCoy observed firsthand the destructive consequences of whiskey and disease and the decimation of wildlife that accompanied the westward movement of whites into frontier regions. He noted similar conditions at missions that he founded near Fort Wayne, Indiana, and at Niles and Grand Rapids, Michigan.

These observations led McCoy to conclude that the federal government must take action to protect Indigenous people by removing them from the bad influence of whites. Always short of cash, he raised money locally and gained the support of Michigan’s governor, Lewis Cass. McCoy also made frequent trips to the East and to Washington, DC, to raise funds and promote his plans.

In 1827, McCoy published Remarks on the Practicability of Indian Reform Embracing Their Colonization, in which he detailed his plans for removal of Native Americans as an expedient to prevent the continued disintegration of the tribes. Believing the tribes held legal title to their traditional lands, he argued that the United States should pay a fair price for the land. With this money the government could establish interest-­accruing trusts from which the tribes could receive annuities and other benefits. The lands west of Iowa, Missouri, and Arkansas would be set aside permanently for Native American habitation. By settling Native Americans in territories isolated from whites, McCoy asserted that missionaries could then properly Christianize them at mission schools.

In 1828 Congress appropriated money to find suitable sites for relocation. As one of the commissioners appointed to travel with Native delegations into the West, McCoy inspected lands that Congress proposed to exchange to them for their homelands. From August through October the commissioners and delegations traveled along the Osage, Neosho, and Kansas Rivers, inspecting the land bordering these waterways.

The following year McCoy investigated the Kansas River valley region looking for a suitable home for the Potawatomi and Ottawa nations. In November he traveled to Washington and participated in the removal debate, appearing before the House Committee on Indian Affairs. While McCoy recognized the problems of President Andrew Jackson’s policy toward Native Americans, he was certain that without removal the eastern tribes could not survive.

In 1830 McCoy accepted an appointment to survey the new Indian territory and soon became involved in work on the Shawnee reservation near present-day Kansas City. He was sufficiently committed to this work to purchase a nearby tract of land. During this time he also sought to reduce tensions between Missourians and Mormons who were rapidly filling Missouri’s Jackson County, which their leader, Joseph Smith Jr., had designated as the location for Zion.

In 1832 McCoy established a mission seven miles from the juncture of the Kansas and Missouri Rivers and three miles west of the state line. He acquired a printing press and published a newspaper, the Shawanoe Sun, edited by Johnston Lykins, McCoy’s son-­in-law. They also printed a translation of part of the New Testament in the Shawnee language. However, McCoy’s vision of a separate Indian country had no chance for fulfillment because the force of white migration had already brought settlers into the territory reserved for Native Americans.

During his final years, McCoy continued his work for Indigenous people, despite many difficulties and disappointments. He accepted a position in Louisville as corresponding secretary of the American Indian Mission Association and wrote The History of Baptist Indian Missions and several numbers of the Annual Register of Indian Affairs within the Indian Territory. On June 21, 1846, McCoy died in Louisville, Kentucky.

———. Remarks on the Practicability of Indian Reform Embracing Their Colonization. New York: Gray and Bunce, 1829.

Schultz, George A. An Indian Canaan: Isaac McCoy and the Vision of an Indian State. Norman: University of Oklahoma Press, 1972.