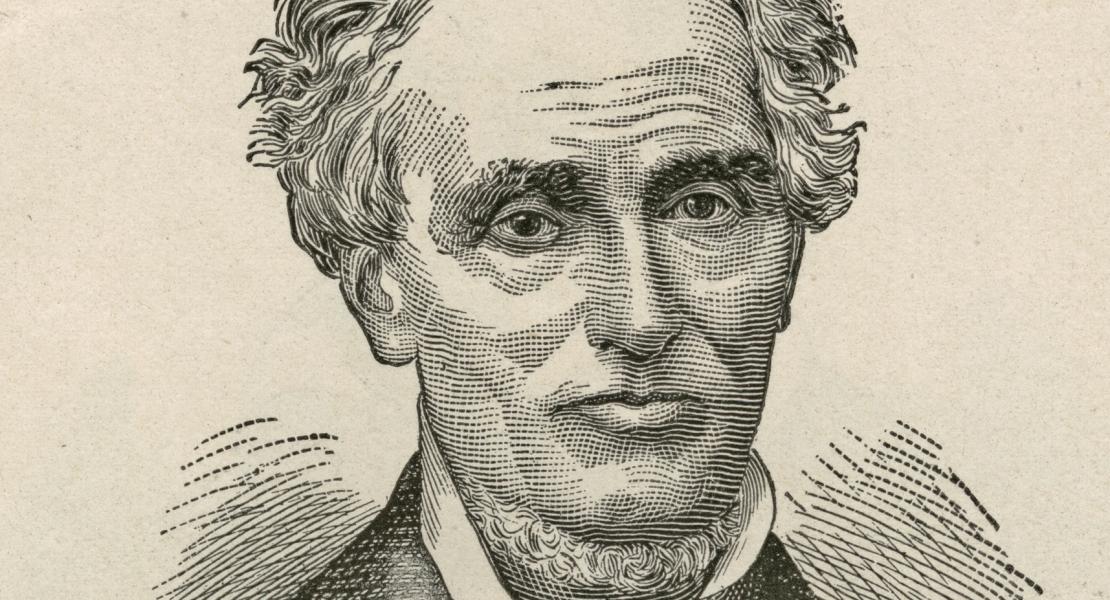 John Mason Peck, a pioneer, Baptist missionary, noted preacher, author, and journalist on the early Missouri and Illinois frontiers, produced important writings that promoted settlement and settled institutions in the Mississippi valley. As one of the first American historians to write about the region, he offered a pioneering sociological analysis of its prospects for growth and progress. Peck’s emigrant guides and his Gazetteer of Illinois form a cornerstone of the primary printed literature of the midwestern region where he labored for forty years; his many travels from hamlet to hamlet in Missouri and the Old Northwest familiarized him with frontier life and the pioneer history of these areas.

Born in Litchfield, Connecticut, on October 31, 1787, Peck was the son of Asa and Hannah Farnum Peck, a farming family with deep New England roots. His growing conviction as a young man that Baptist missionary work was his true calling led to Peck’s ordination as a preacher in New York in 1813. By 1817, after further study and preparation, he and James Welsh established the Western Baptist Mission, one of the first Protestant churches in St. Louis.

Peck, who maintained constant communication with religious, educational, and benevolent societies in New England, New York, and Philadelphia, became convinced early in his career that schooling was woefully inadequate in the rapidly developing territories of the trans-Appalachians. Traveling, preaching, and writing “indefatigably,” Peck founded Rock Spring Seminary some eighteen miles from St. Louis in St. Clair County, Illinois. After moving to Upper Alton, Illinois, the school, one of the first colleges in the state, eventually grew to become Shurtleff College thanks to bequests Peck solicited personally from Benjamin Shurtleff of Boston.

Peck encouraged the gathering of primary accounts and descriptive materials that he knew would be lost otherwise. Students of history in his own time and later appreciated his gifted understanding of the past and his historical analysis. Jared Sparks, the early biographer of prominent figures in the new American Republic and, later, president of Harvard College, published Peck’s important biography of Daniel Boone (1847), an account of the famed frontiersman’s life based on interviews that Peck conducted at Boone’s home on the Missouri frontier. Peck was concerned with the pioneering spirit exemplified by Daniel Boone and was one of the first serious writers to recognize that he was a powerful symbol for the unimpeded growth of America.

In 1852 Harvard bestowed upon Peck an honorary doctorate (in systematic theology) at the same time that it conferred an honorary doctorate of law on Alexis de Tocqueville. This was no mere coincidence. Peck’s admirers had in fact likened him to de Tocqueville. As the quintessential pioneer intellectual, he was a keen student and observer of the western lands as a laboratory for civilization’s eventual triumph.

Peck ceaselessly promoted frontier settlement. He routinely made journeys on horseback through Missouri and the Ohio valley to shore up fragile missions, schools, and charitable societies he had helped establish. His books encouraged internal improvements of all kinds in the West to promote settlement. He studied prospects for missions among Native Americans, and he collected anything he could about the Indian tribes. By inclination he was a political moderate, an abolitionist worried about the effects of nonviolent dissent in slaveholding areas. However, Peck’s vocal antislavery views were important rallying cries in keeping Illinois united as a free state during the dangerous political controversies of the early 1820s.

When Peck came to St. Louis, he immediately began to preach to slaves. He had, in fact, ordained John Berry Meachum, a former slave, and he regularly preached to Meachum’s African American congregations.

As a journalist Peck edited several periodicals, including the Western Watchman in the late 1840s. His writings included Guide for Emigrants (1831) and The Travelers’ Directory for Illinois (1840). He edited James Perkins’s Annals of the West (1850), a work that was as close as Peck carne to completing his own proposed magnum opus, “The Moral Progress of the Great Central Valley of the Western World,” for which he had gathered notes and sketches for many years. Peck also wrote The Principles and Tendencies of Democracy (1839), a bibliographical work; The Death of Eminent Men a National Calamity (1834); “Historical References for the Valley of the Mississippi” in The American Pioneer (1843); and sketches on western cities for Charles A. Dana’s The United States Illustrated in Views of City and Country (1853).

Peck optimistically believed that continued emigration and settlement would ensure the growth of civilized institutions and society in the western territories. To this end he spoke out constantly for the establishment of schools and churches to receive the new settlers. He clearly expected churches to be leaders in promoting western settlement.

Peck’s influence was gradually recognized, and he was honored as one of the first men of letters in the Mississippi valley. He worked to unite isolated communities and families on the frontier into a large, productive commonwealth. His eloquence and zealous belief in social progress helped create a sense of pride and destiny in the areas he served. Peck is representative of those individuals of genius in the early West who helped ensure its rapid rise to prominence in national affairs. He died on March 14, 1858.