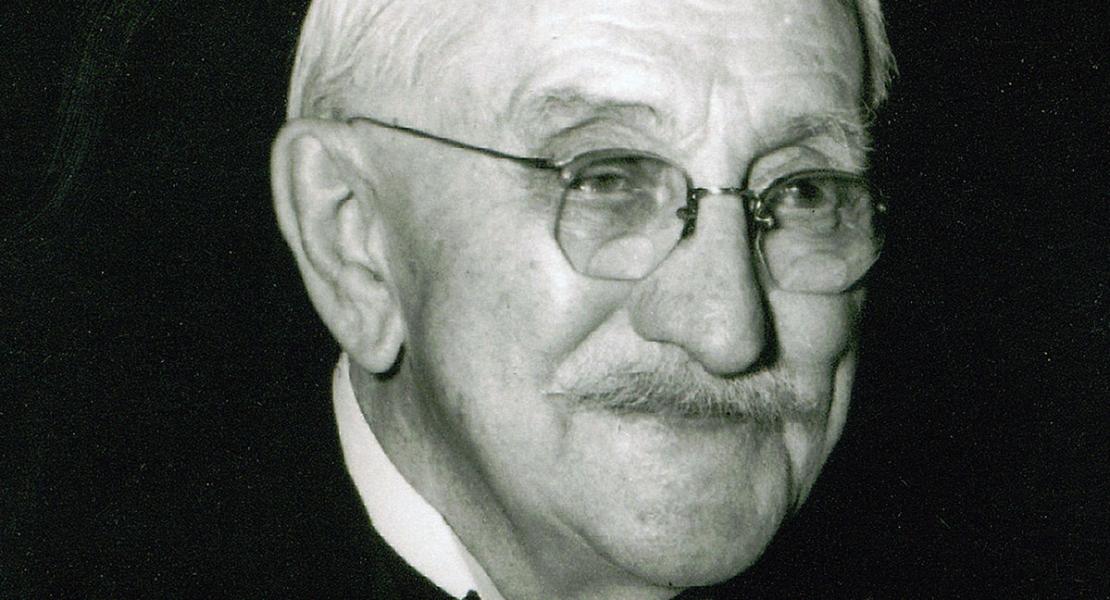 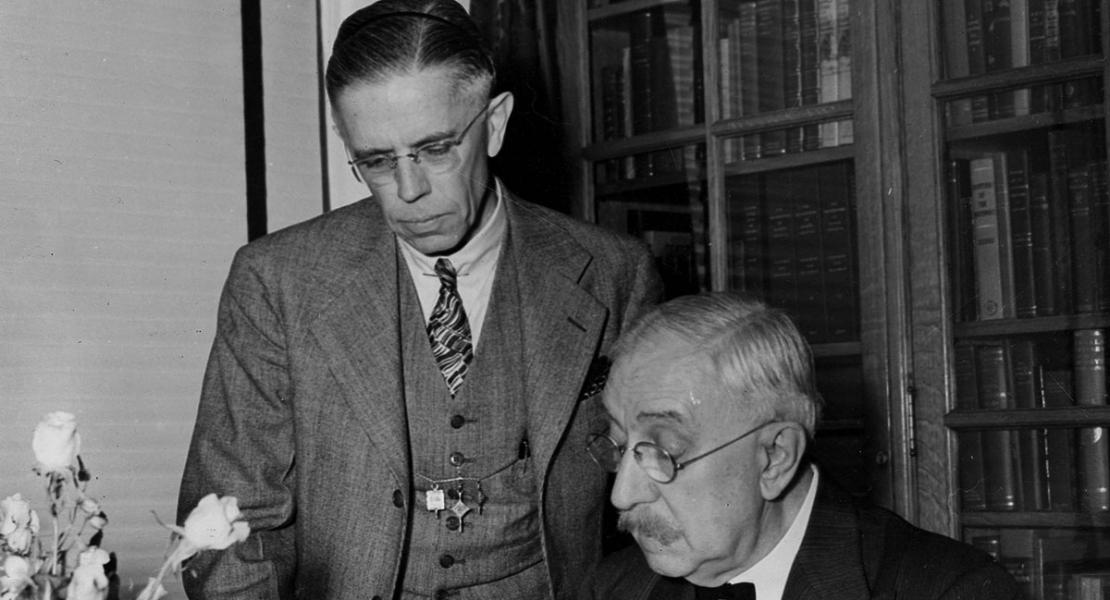 J. Christian Bay was born to Lars and Doris Christiansen Bay on October 12, 1871, in Rudkohing, Denmark. As a young man, Bay was captivated by his father’s tales of traveling to California in search of gold during the 1850s and by the vivid descriptions of the West found in German writer Baldwin Möllhausen’s Diary of a Journal from the Mississippi to the Coasts of the Pacific. Bay’s love of American history, combined with his professional career as a librarian, resulted in the creation of one of the country’s finest collections of Middle Western Americana.

It was a passion for plants, however, that first brought Bay to the United States in 1892. Educated at the University of Copenhagen, the young Dane found work as a library assistant at the Missouri Botanical Garden in St. Louis under the direction of distinguished botanist William Trelease. During his time in St. Louis, Bay wrote scientific articles and published reviews, establishing a scholarly reputation in botanical studies. In 1894 he accepted a position as a bacteriologist with the Iowa State Board of Health in Des Moines. This was followed by a short and unhappy stint in 1898 as the principal of Ashland High School in Grant, Michigan.

In 1901 Bay found his calling when he joined the staff of the Library of Congress in Washington, DC. During the five years he spent at the country’s most famous library, Bay learned the fine art of classification, cataloging, and bibliography from Charles Martel and J. C. M. Hanson, two of the most influential librarians of the era. Bay’s own growing reputation as a librarian led to an offer of employment in 1905 from the prestigious John C. Crerar Library in Chicago. He spent the rest of his career at the Crerar, retiring as head librarian in 1947.

By the time he moved west to Chicago, Bay had already begun collecting rare books, and he continued to do so over the next forty years. He was inspired by fellow collectors such as Lyman C. Draper, whose collection of early American frontier history formed the nucleus of the Wisconsin Historical Society’s manuscript collection, and Clarence Monroe Burton, whose private library on Michigan and the Northwest Territory became an integral part of the Detroit Public Library. But it was fellow collector Edward Everett Ayer whom Bay considered the “ideal collector of literary monuments.” Ayer, whose collections reside in Chicago at the Field Museum of Natural History and the Newberry Library, assembled fifty thousand books and manuscripts on American history, with an emphasis on Native American culture.

As a collector, Bay had a discerning eye. Among his most notable purchases were first editions of Meriwether Lewis’s Travels to the Source of the Missouri River and Across the American Continent to the Pacific Ocean, Thomas McKenney’s History of the Indian Tribes of North America, and John James Audubon’s richly illustrated The Birds of North America and The Quadrupeds of North America.

Focusing on the Northwest Territory, Midwest, and Great Plains, Bay acquired books that encompassed the settlement and development of the American West. He purchased travel narratives, biographies, memoirs, and histories such as Henry Rowe Schoolcraft’s Journal of a Tour into the Interior of Missouri and Arkansaw, J. H. Colton’s Colton’s Traveler and Tourist’s Guide-Book through the Western States and Territories, George Hunter’s Reminiscences of an Old Timer, George Washington Stipp’s The Western Miscellany, and Theodore Roosevelt’s Winning of the West. Bay, a lifelong student of natural history, also purchased scientific pamphlets and government publications such as The Glacial and Post-Glacial Lakes of the Great Lakes Region and Reconnaissance of the Yellowstone River.

After learning of Bay’s collection in 1940, State Historical Society of Missouri director Floyd C. Shoemaker contacted Bay, who happened to be a member. Shoemaker expressed his interest in Bay’s personal library and asked him to notify the Society if he became interested in selling it. Bay responded positively to Shoemaker’s inquiry. According to the elderly librarian, his children were uninterested in his library, and although he had received inquiries from other interested parties, he feared his library would be “scattered by auction or bookseller’s sale,” adding that it “would be contrary to my principles to fish for offers and accept the highest bid.” Bay informed Shoemaker, “I would accept $17,500 for all my holdings, nothing reserved, if the material could be kept together.”

Shoemaker moved quickly after receiving Bay’s terms. In a letter to Isidor Loeb, chairman of the State Historical Society of Missouri’s finance committee, Shoemaker wrote, “The acquisition of such a collection would attract and maintain national attention. It would give our society . . . national rank in the great field of Middle West and Western Americana.” Shoemaker visited Bay in Chicago and returned to Columbia with an inventory of his library. Cataloger Pearle McCown assessed Bay’s holdings, finding that the Society owned only 17 percent of the titles in Bay’s collection and that the collection was probably worth $50,000. Shoemaker and the finance committee agreed that Bay’s library should be purchased.

But first the State Historical Society had to resolve how it would pay for the collection. Shoemaker and the Society’s trustees approached several prominent individuals for assistance, including entrepreneur and Missouri native J. C. Penney, but their efforts failed to raise any funds. Ultimately, bonds in the membership trust fund were sold to pay for Bay’s library. It was the State Historical Society of Missouri’s most significant acquisition since 1901, when a donation of Missouriana by Francis A. Sampson, a lawyer, editor, and naturalist, formed the core of its research library. Upon delivery in November of 1941, the Bay Collection’s 2,987 books, autographs, and manuscripts were housed in a special rare book room designed for the task. Bay advised that the bookends be “made of wood and with felted base” and opined that “steel shelves are good only for the ordinary riff-raff of books.” The Bay Collection was opened to the public in a ceremony on April 20, 1942.

A consummate collector, Bay regarded his library as “a rare and wonderful collection, rich in spotless copies of works of which we may all well be proud.” As noted by Shoemaker, “No expense was spared by Mr. Bay in the preservation of the collection. The beautiful and serviceable bindings came from the hands of the most skilled binders of Chicago and New York, as well as of Berlin, London, and Paris.” Bay himself advised the Society on a number of significant subsequent purchases, including the Biddle-Allen edition of the History of the Expedition under the Command of Captains Lewis and Clark, Edward S. Curtis’s The North American Indian, and George Catlin’s North American Indian Portfolio.

Bay died on April 12, 1962, in Chicago. Over time, his love of Middle Western Americana became something more than just a collection of books. In his address to the Society’s annual meeting in 1942, Bay declared his collection “a library, not a chance aggregation, because it was formed around the idea that our pioneer spirit, our western life, is worth preserving in record and by way of emulation. In fact, this spirit will not be forgotten or overlooked. It still unites us. It still is true that this region, the Middle Border, is our country’s heart, and that heart remains sound, whatever comes, whatever passes.”