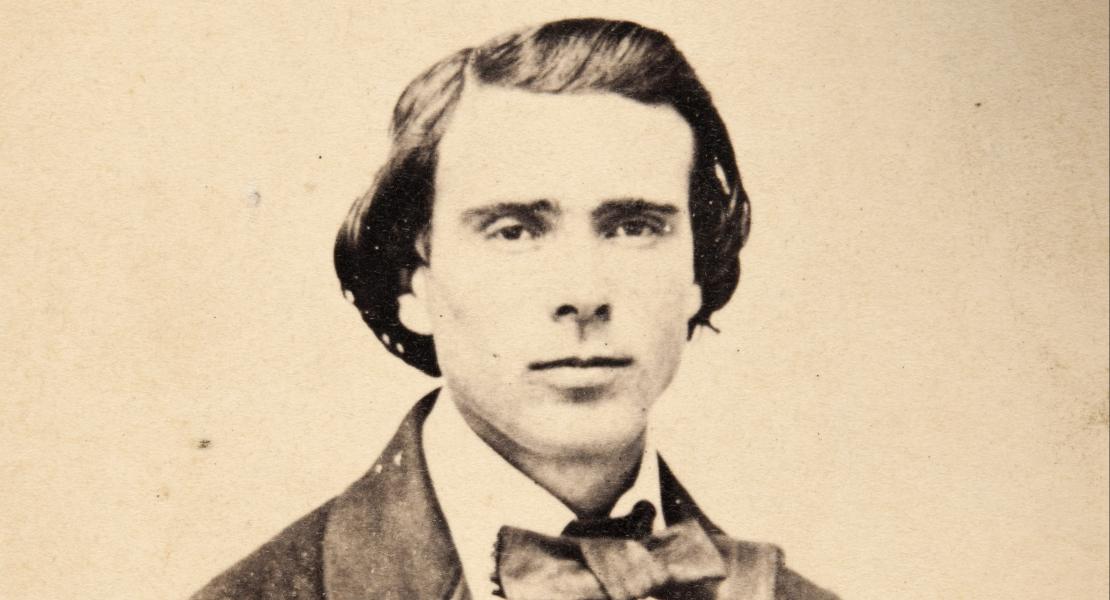 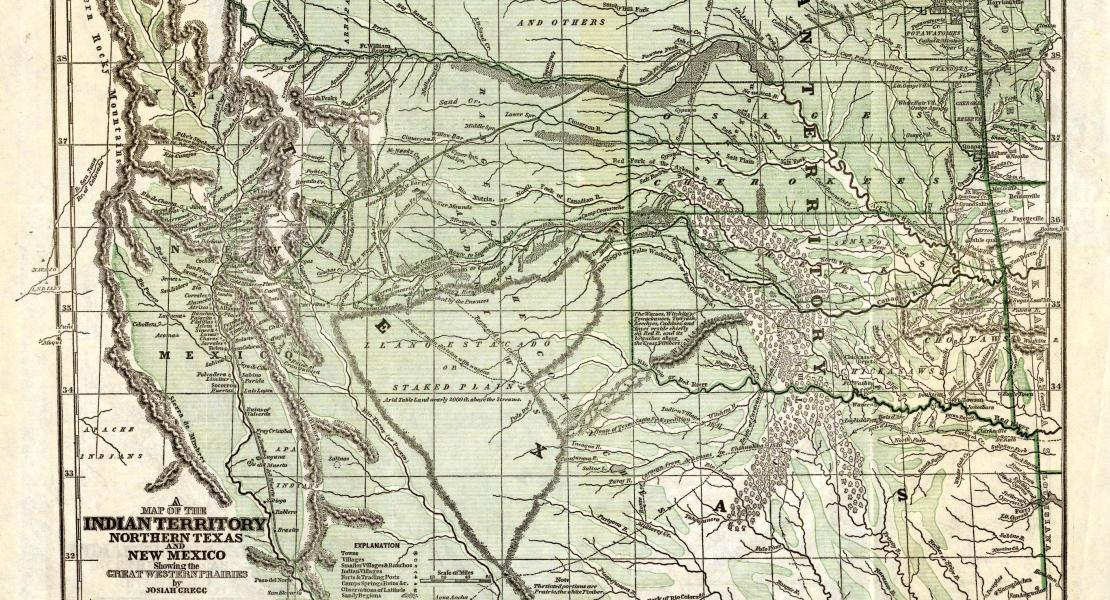 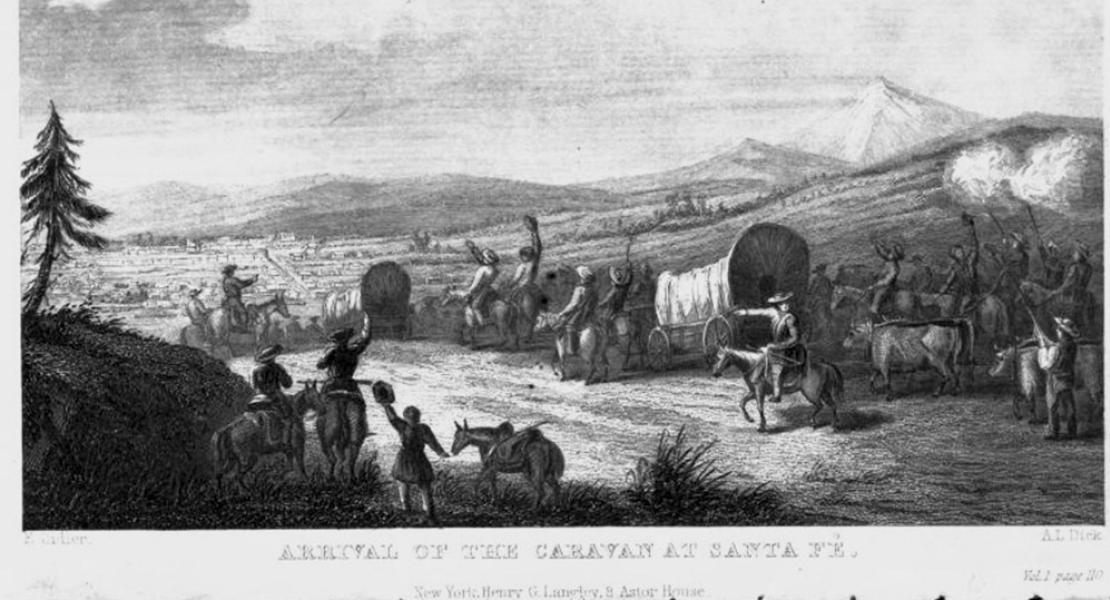 From his father, Wheelwright Harmon Gregg, Josiah Gregg inherited a roving spirit that shaped his character and his life. The elder Gregg had already moved his family from Pennsylvania to Kentucky to North Carolina to Overton County, Tennessee, when Josiah was born on July 19, 1806. In 1809 the family moved to Illinois and in 1812 to Cooper’s Fort, in Howard County, Missouri. The Greggs finally settled in 1825 near the future site of Independence.

While his brothers followed the usual pursuits of boys growing up on the Missouri frontier, Josiah’s frail health and aptitude for learning seemed to destine him for a professional career. Largely self­educated, he displayed a talent for mathematics and a vigorous scientific curiosity early in life. After a year of teaching school in 1824, he considered medicine as a profession, but instead took up the study of law. The drudgery of law books was not to his taste, however. Boredom, frustration, uncertainty, and chronic ill health laid the young man low in 1830. His doctor diagnosed the condition as chronic dyspepsia and consumption, and prescribed a trip to the prairies, where pure air, healthful activities, and a change of scenery would restore his health. Gregg’s brothers, Jacob and John, had both traveled with traders’ caravans to Santa Fe in the 1820s. Drawing on their knowledge and connections, the family arranged passage for Josiah with a caravan leaving Independence for Santa Fe in May 1831. Although an invalid at the journey’s beginning, Gregg quickly recovered his health, paid his way by working as a bookkeeper, and taught himself Spanish on the trip.

The traveling life of a Santa Fe trader appealed to Gregg’s restless nature and insatiable curiosity. He spent the next nine years in the trade, completing four trips from Missouri to Santa Fe and back again. On his fourth trip in the spring of 1839, he blazed a new trail from Van Buren, Arkansas, to reach Santa Fe ahead of rivals.

Although Gregg had some financial success as a trader, his trips were far more than moneymaking ventures. He claimed to enjoy good health only when living the free-ranging life of the caravans. He wanted to know everything about the prairies and all that lived upon them. He drew maps and kept careful records of his observations on the long trips. Returning to Missouri in 1840, Gregg began to fashion a book from his maps and notes. Accustomed to a roving life, he found it hard to stay in one place even to work on his book, however. To earn a living he sold mules and bought land in Texas, worked at various odd jobs in Missouri, worked as a surveyor in Van Buren, and opened a store there with his brother and another partner.

In 1843 Gregg traveled to Philadelphia and New York to find a publisher for his book. After many frustrations and false starts, he finally secured a contract with Henry G. Langley in New York. The first edition of his book, Commerce of the Prairies, rolled off the press in the summer of 1844 and immediately became a best-seller. By fall a second edition was in progress; within a year, British and German editions appeared, and by 1854 there would be five reprints in the United States.

The book’s success was due in part to some fortunate connections with good publicists in the East. The timing was right as well: interest in the Far West was rapidly growing in the United States and abroad in these years of the Oregon Trail, Polk’s election on an expansionist platform, and disputes with Britain and Mexico over US expansion. Gregg’s book deserved its success on its own merits as well. Plain but elegant and sensitive language captured the romance of the prairie and the strange lands beyond, yet provided practical advice for the traveler. With a new map prepared by Gregg, his book was the most complete and reliable guide then available to the Santa Fe Trail. His careful descriptions of life on the trail and in New Mexico quickly established the book as a classic of western literature. Although the success of Commerce of the Prairies might have initiated a career as a writer, the drudgery of desk work was not to Gregg’s taste. He continued to keep journals of his travels, worked intermittently on manuscripts, and occasionally wrote for newspapers, but he never published another book.

Still searching for a niche in life, Gregg returned to the study of medicine. He may have had some formal training in his youth, but more likely taught himself enough to acquire a reputation as a doctor among the fraternity of Santa Fe traders. In the fall of 1845 he entered medical school at the University of Louisville, and in March 1846 he received an honorary degree in medicine. Again, Gregg could not discipline himself to routine study and practice. Instead, he returned to Missouri to join another caravan bound for Santa Fe. War with Mexico interrupted his trip, and he left the traders’ caravan en route to join the Arkansas volunteers bound for Mexico. Gregg served as a civilian aide, guide, interpreter, and mapmaker on General John Wool’s staff, as well as a war correspondent for the Louisville Gazette. But he quickly tired of the discipline of military life, the soldiers’ coarse behavior, and Wool’s difficult temperament. After witnessing the Battle of Buena Vista in February 1847, Gregg left to seek adventure for a short time with Colonel Alexander W. Doniphan’s Missouri volunteers. Next, a proposed business venture with Santa Fe trader Samuel Magoffin failed. Gregg then cast about unsuccessfully for a government job, and finally set himself up as a doctor in private practice serving the army of occupation and other Americans in Saltillo, Mexico.

Beginning in 1846, if not earlier, Gregg had been collecting botanical specimens for George Engelmann, the founder of a collection that would become the St. Louis Botanical Gardens. In the spring of 1848 Gregg’s restless nature got the better of him again. He abandoned his medical practice and set off on a scientific expedition through central Mexico to collect for Engelmann and indulge his own fascination with botany, ornithology, and geology.

Arriving at Mazatlán in time to hear of the gold strike in California, Gregg boarded a ship for San Francisco, more from the drive of his relentless curiosity than expectations of a fortune. In California he encountered former business partner Jesse Sutton and considered another attempt at the mercantile business, but continued his scientific collecting and exploring. In October 1849 the men of a small mining camp on Trinity River elected him to lead an expedition across the mountains to the coast in search of the river’s mouth, a good port, and direct access to the sea. Although bad weather and rugged terrain discouraged most of the party, Gregg and seven men struggled through the mountains in November and December 1849. They named the Mad River, followed it to the coast, and discovered and named Trinity Bay. (A later expedition by sea would rediscover the bay and rename it Humboldt Bay.) On the point of starvation, suffering from exhaustion and exposure, and quarreling bitterly among themselves, the party did not tarry to make further discoveries, but turned back to the settlements. During the return trip a fall from his horse exacerbated the effects of hardship and hunger for Gregg. He died and was buried by his comrades in the California wilderness in late February 1850.

Gregg’s life epitomized the restless spirit of adventure and quest for opportunity that drove nineteenth-century American expansion. His book, Commerce of the Prairies, remains a masterpiece in the literature of the West.