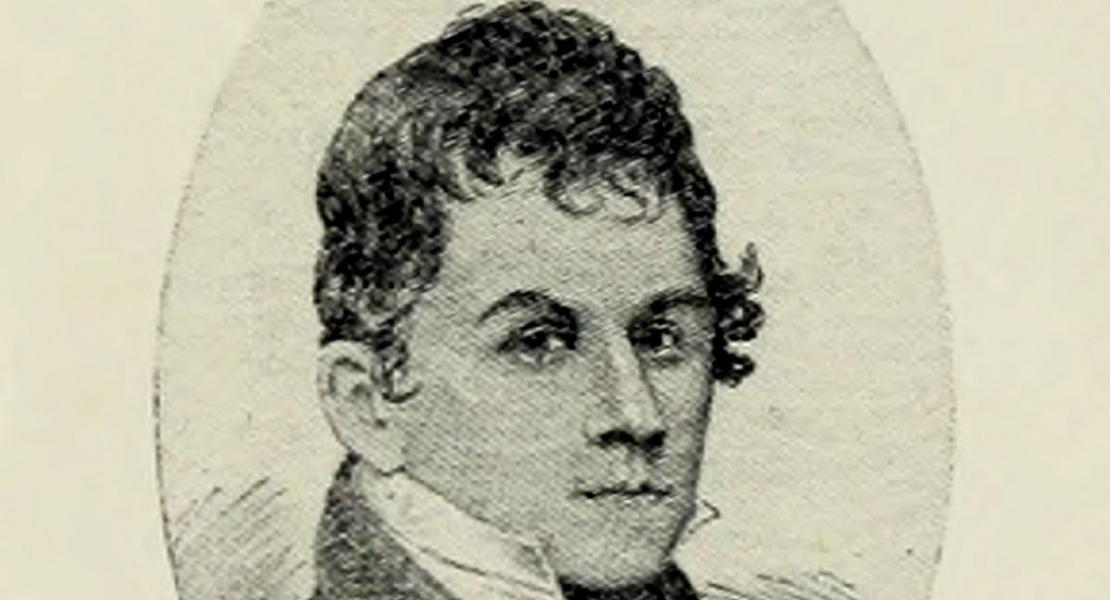 Edward Hempstead, a prominent early Missouri attorney and politician, was born in New London, Connecticut, on June 3, 1780. He studied law, gained admission to the bar in 1801, and practiced his profession for three years in Rhode Island before deciding to seek new opportunities in the rapidly developing western American territories. Hempstead stopped briefly in Vincennes, in Indiana Territory, but soon determined to go on to the recently acquired Louisiana Territory. According to one account, the eager young attorney walked from Vincennes to St. Louis, carrying his belongings in a bundle slung over his back.

Not long after his arrival in Upper Louisiana in 1804, Hempstead secured an appointment as deputy attorney general for the districts of St. Charles and St. Louis. He initially took up residence in St. Charles, where he devoted much of his time to studying French, but in 1805 he moved his law practice to St. Louis. Although he opposed the political machinations of the pro-French governor, James Wilkinson, Hempstead somehow managed not to alienate prominent local French Creole leaders. He was, in fact, one of the first American lawyers in the territory to appreciate the profitability of handling land adjudication cases for French clients unfamiliar with American legal practices. Following Wilkinson’s departure, Hempstead became a champion of the Spanish land claimants’ cause.

Hempstead quickly emerged as a rising star in the fledgling trans-Mississippi legal community. His courtroom oratory was so successful that other lawyers attempted to imitate his sharp, preemptory speaking style. Governor Meriwether Lewis appointed him attorney general for the territory in 1809. Hempstead's legal practice flourished, and in 1812 he formed a brief partnership with David Barton, another up-and-coming member of the territorial bar.

Other members of the Hempstead clan soon followed Edward from their native New England to St. Louis. His father, Stephen Hempstead, became an ardent backer of efforts to organize Presbyterian churches in the trans-Mississippi territory, and his widowed sister, Mary Hempstead Keeney, married the renowned Spanish trader Manuel Lisa. Edward’s 1808 marriage to Clarissa Dubreuil helped cement his relationship with the St. Louis Creoles, who increasingly looked to him for assistance in litigating land claims cases.

When Congress approved the creation of Missouri as a second-class territory in 1812, Hempstead declared as a candidate for territorial delegate. With backing from a coalition of French Creoles and long­-established Americans, he defeated the three other contenders in the race and became Missouri’s first representative in the US Congress.

Hempstead compiled an impressive record during his brief tenure as the territory’s nonvoting congressional delegate. He successfully lobbied for added federal military assistance to protect the exposed territory against the increased threats caused by the declaration of war against Great Britain in 1812. His announcement early in 1813 that Congress had agreed to authorize the raising of ten companies of rangers, including three for the Missouri Territory, was especially welcomed by his anxious constituents. Hempstead also helped secure congressional approval for a more liberal land-confirmation policy that included an agreement to rescind a previous decision to deny all grants issued by Spanish authorities after 1800. Despite his successes as territorial delegate, Hempstead declined to seek reelection in 1814. Following the completion of his term in Congress, he returned to St. Louis and resumed his thriving legal practice.

A tragic accident cut short Hempstead's promising career. He died in St. Louis on August 9, 1817, from complications of injuries he sustained when he was thrown from his horse. Many mourned his premature passing, including his good friend Thomas Hart Benton, who insisted on attending his funeral services before going to meet Charles Lucas on the dueling ground.