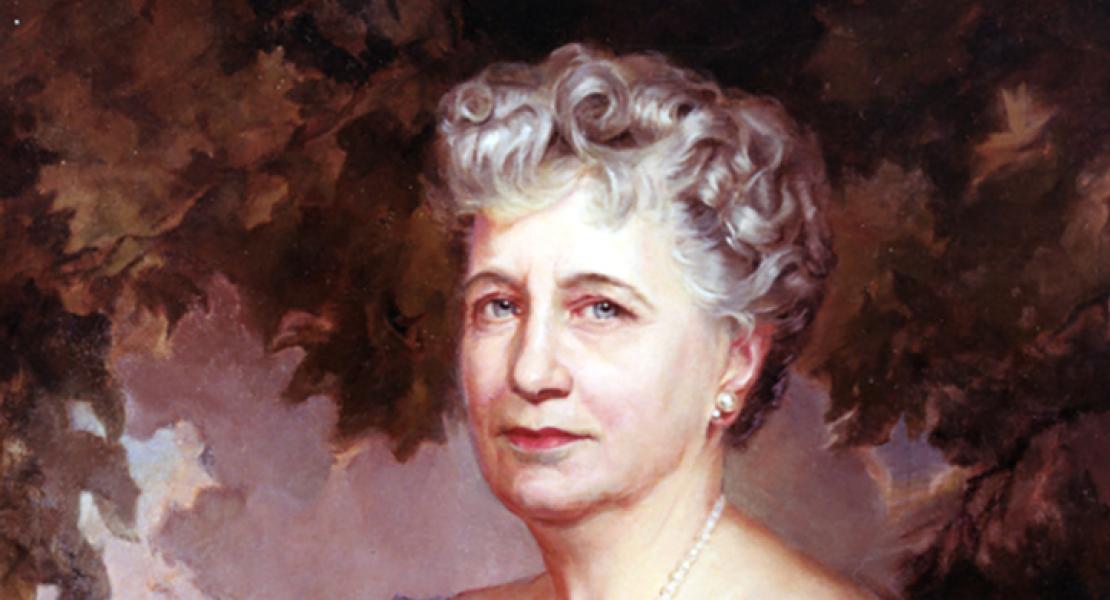 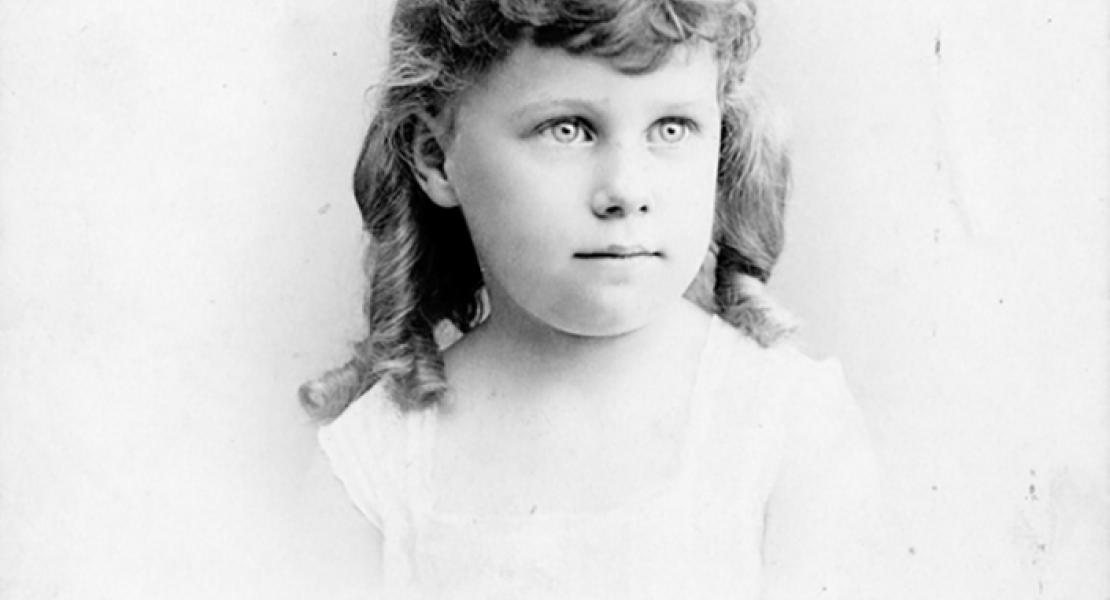 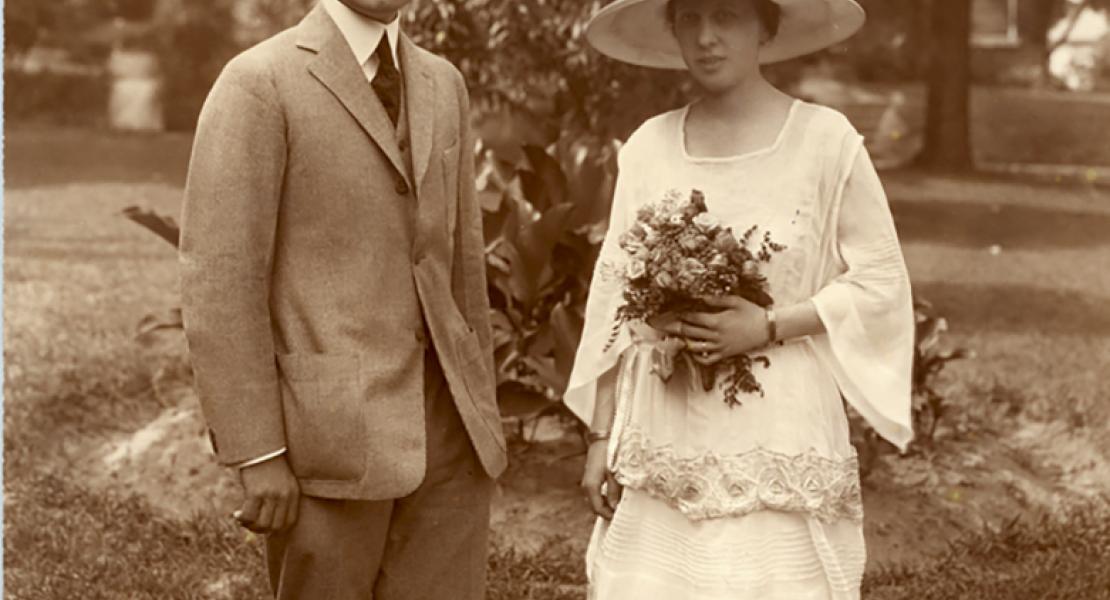 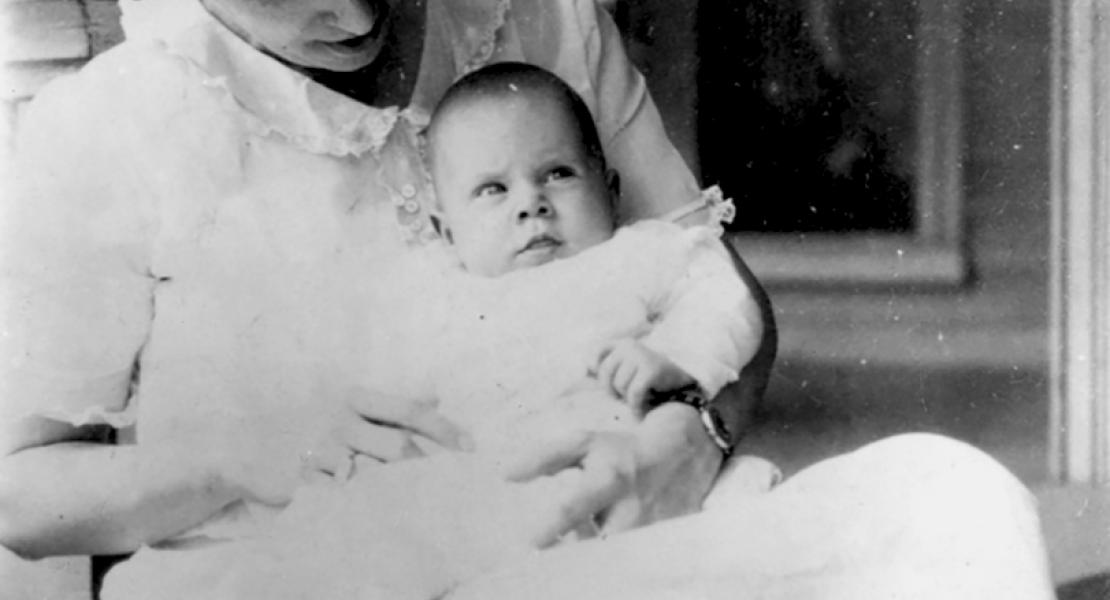 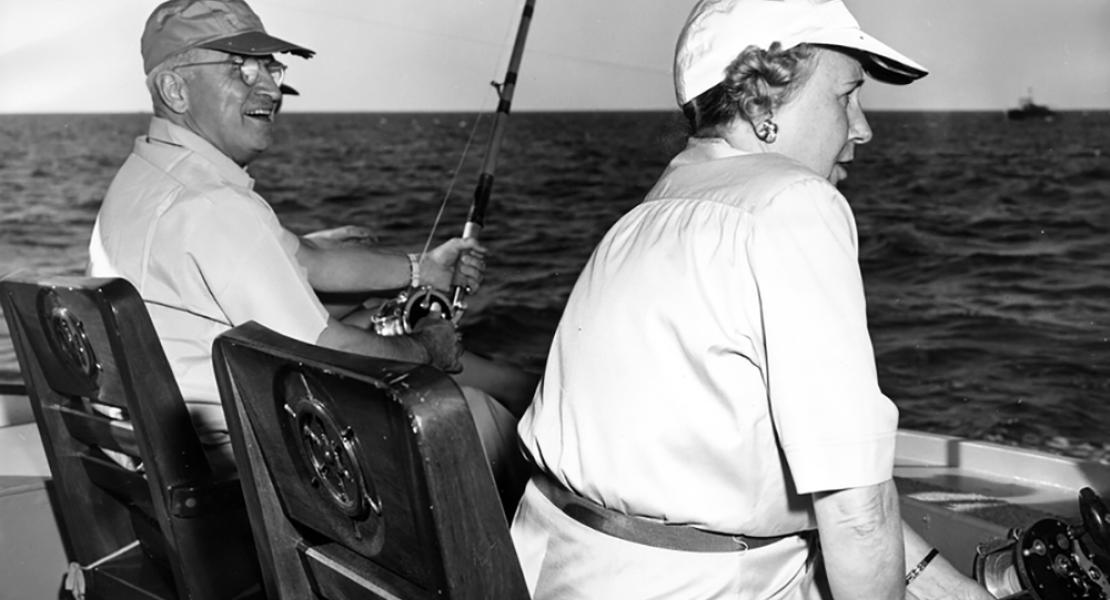 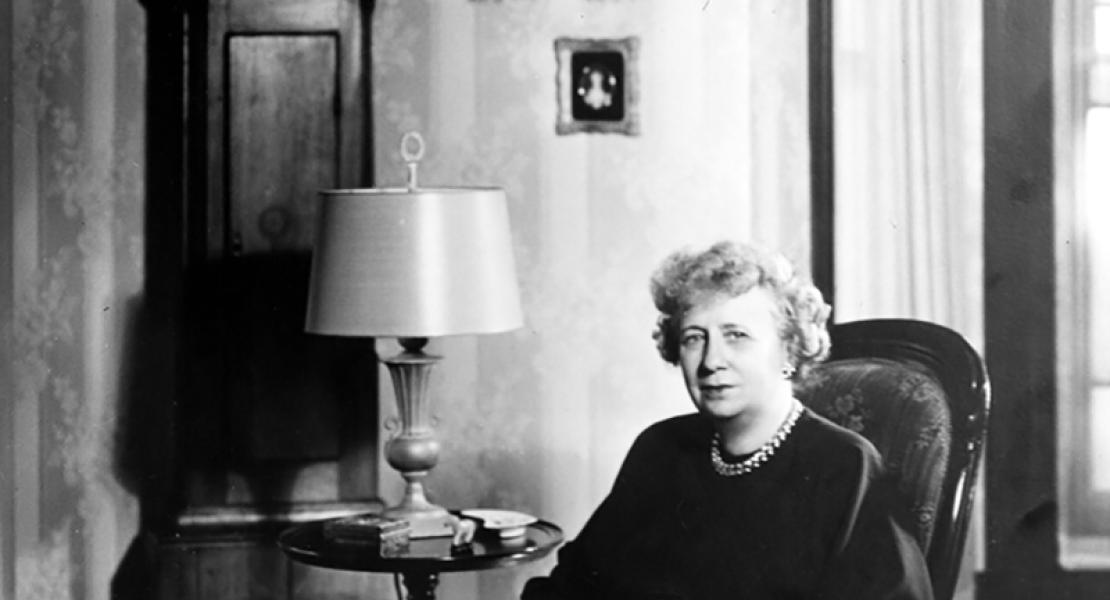 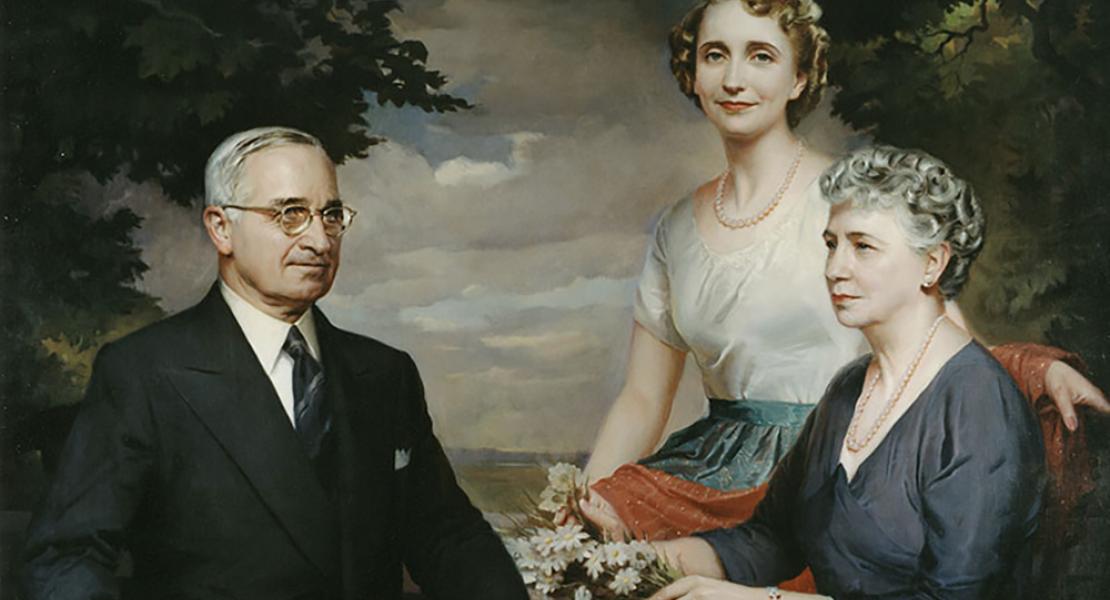 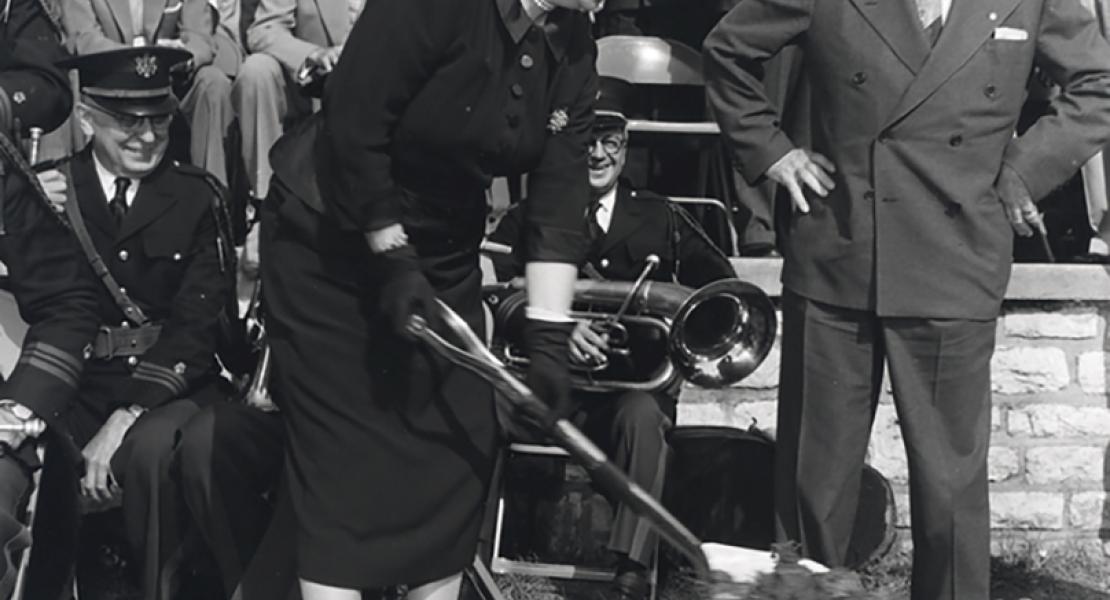 Born in Independence, Missouri, on February 13, 1885, Elizabeth Virginia Wallace, who as the wife of the thirty-third president of the United States was accustomed to sign her name as Bess W. Truman, graduated from Independence High School in 1901, in the same class as her future husband. Her mother, Margaret Elizabeth “Madge” Gates Wallace, was the daughter of George Porterfield Gates, one of the wealthiest men in the town. Gates owned the Waggoner-Gates Milling Company, which produced Queen of the Pantry flour, a well-known cake and biscuit flour sold throughout the Midwest. Her father was David Willock Wallace, holder of various appointive political offices in Jackson County.

In the years after graduation, Bess Wallace assisted her mother with the household, until 1903 when the stark tragedy of her father’s suicide persuaded the family to remove to Colorado Springs for a year, after which mother and daughter and three younger brothers lived with the maternal grandparents in a seventeen-room house at 219 North Delaware Street. Bess attended Barstow School, a finishing school, in 1905–1906. She remained in the family house until her marriage to Harry S. Truman on July 28, 1919.

Truman had met Bess Wallace in Presbyterian Sunday school in 1890 and, as he put it, fell in love with the then-five-year-old. Throughout high school they saw each other daily. At that time Truman lived three or four short blocks from Bess. There is no evidence that the couple saw each other between 1901 and 1910. The courtship began in 1910, when Truman was assisting his father on a large farm near the village of Grandview, twenty miles south of Kansas City. Almost at once Truman expressed his desire to marry Bess, but she gently refused, perhaps because she felt that her mother needed her to help with the large house and the family that now included aging grandparents. Her beau’s participation in World War I brought an engagement and then marriage upon his return. Bess Truman and her new husband chose to live in the Gates house, which after the death of Madge Wallace in 1952 became the Truman house by purchase from Bess’s brothers.

During the 1920s, while Bess’s husband first conducted a haberdashery in Kansas City (1919–1922) and then was eastern judge of Jackson County (1923–1924) and presiding judge (1927–1934), the Truman family lived at 219 North Delaware. A daughter, Mary Margaret, was born in 1924. Beginning with the Senate years of Harry, Bess and Margaret spent half years in Washington, DC, until World War II, when Margaret enrolled at George Washington University and they became permanent residents of the capital. They of course resided at the White House during the presidency from 1945 to 1953.

Bess Truman did not find politics interesting and sought to remain largely apart from her husband’s preoccupation beginning in 1923. During the Senate years and those of the presidency she often returned to Independence, where she enjoyed her bridge club and otherwise occupied herself with seeing her many friends. It is perhaps of special interest that after a rather awkward period in Washington at the beginning of the Senate years in her husband’s life, Bess Truman became acclimated to life in the capital. However, she did not wish her husband to aspire to higher office, and when his nomination for the vice presidency loomed in the early weeks of the summer of 1944 she displayed considerable animus over the prospect, which she thoroughly understood, not merely of the vice presidency (for President Franklin D. Roosevelt was obviously going to be reelected in November 1944) but of the presidency. Roosevelt’s health, so the leaders of the Democratic Party saw, was deteriorating, and he could not possibly survive a fourth term. Margaret Truman has written that during the trip back from Chicago, where the Democratic National Convention nominated her father for the vice presidency, the temperature in the Truman automobile was close to arctic. The reasons are difficult to be sure of. One might have related to the suicide of Bess’s father, which fact had never been communicated to Margaret; at the turn of the century suicides were considered family disgraces. The vice presidential campaign, not to mention the presidency, was bound to bring it out. Another might have been Bess Truman’s belief that the White House was an improper environment, almost a goldfish bowl, for a young daughter. Another may have been dislike for the rigmarole of being a president’s wife, though when in Washington during her husband’s presidency (she often went back to Independence, sometimes remaining for months on end) she performed her duties as first lady with aplomb if not with the wide-­ranging zest of her predecessor, Eleanor Roosevelt.

Upon return to Independence after the presidency, Bess Truman took up the life she had known. It was a routine that seldom varied. She rose each morning two or three hours after her early-rising husband and made breakfast for him. Her longtime house helper Vietta Garr provided the other meals. Her husband spent much of his time at the Harry S. Truman Library, a few blocks to the north, or was away for speeches and other Democratic Party events. Bess Truman survived her husband by a decade, dying on October 20, 1982. Burial was in the courtyard of the library, beside the grave of her husband.

Robert H. Ferrell was a professor of history at Indiana University and the author or editor of more than sixty books, particularly on American diplomacy, war, and the presidency.