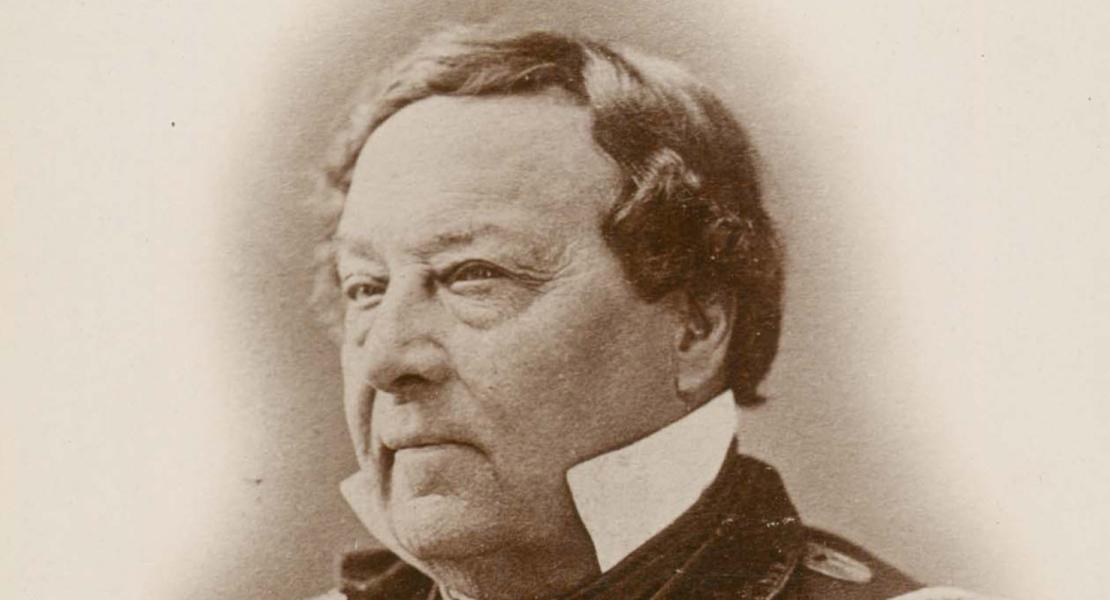 Benjamin Louis Eulalie de Bonneville was born in Paris, France, in 1796. His father, a publisher, was a close friend of Thomas Paine. When the elder de Bonneville criticized Napoléon’s regime, he was arrested, his newspaper suppressed, and the family ruined. Paine brought Madame de Bonneville, Benjamin, and his younger brother Thomas to New York, and provided for their support. Appointed to West Point, Benjamin graduated in 1815.

After serving with the artillery in New England, Bonneville was sent to the Southwest in 1820. He served with the Seventh Infantry at Fort Smith, Arkansas, and Fort Gibson in the Indian Territory. Visiting New York in 1824, Bonneville met another of his father’s friends, the Marquis de Lafayette. He accompanied the old general to France, serving for a year as his secretary.

On his return, Bonneville resumed his post at Fort Gibson. The young captain’s duties brought him into frequent contact with Indians, trappers, and traders whose colorful lives contrasted sharply with the dull routine of garrison duty. Bonneville planned an adventure of his own in the western mountains for scientific and military exploration, for fame, and for profit in the fur trade. He found financial backers in New York and secured a two-year leave of absence.

In September 1831, Bonneville arrived in St. Louis. He spent the winter traveling, consulting traders, gathering men, and outfitting his expedition. On May 1, 1832, he left Missouri with 110 men and twenty wagons. For more than three years they ranged the Far West. In August 1832 the novice trader established Fort Bonneville on the Green River in the heart of prime trapping country. From this base he sent out exploring parties, the most important of which was Joseph Walker’s expedition to the Great Salt Lake and California in 1833. Bonneville himself twice crossed the mountains to reconnoiter the Hudson Bay Company’s posts on the Columbia River. Probably on his own initiative, possibly on secret orders from the War Department, he explored routes through the mountains, kept detailed journals, drew maps, tested British strength in the Northwest, and by dispatch reported his findings to the general­-in-chief of the army.

Bonneville savored the adventure and freedom of mountain life, but he failed as a businessman. He was too inexperienced and his resources too limited to compete with the established American companies of the Rocky Mountain fur trade. Although he caused his rivals some anxiety in the race for prime trapping areas and experienced trappers, ultimately the American companies drove Bonneville out of business. He returned to Missouri in late August 1835 and learned that he had been dropped from the army’s rolls for overstaying his leave. Over the protests of fellow officers, but with Missouri senator Thomas Hart Benton supporting his claims, US president Andrew Jackson reinstated Bonneville in April 1836.

The captain returned to duty with the Seventh Infantry in the Southwest, surveying roads and policing Indians and settlers. He served with his regiment against the Seminoles in Florida from 1839 to 1842. When the Mexican War began in 1846, Bonneville was promoted to major and transferred to the Sixth Infantry. He served in Mexico under General Winfield Scott. During much of that campaign he was in active command of his regiment, and he was brevetted lieutenant colonel for gallantry in the battles of Contreras and Churubusco.

After the war, Bonneville served at various western posts. As colonel of the Third Infantry in 1857, he temporarily commanded the Department of New Mexico. Although much ridiculed by his junior officers, “Old Bonny Clabber” led a punitive expedition against the Mogollon Apache that won the praise of his commander and the territorial legislature.

Bonneville retired from active duty in 1861 but was immediately called back to service as recruiter and chief mustering and disbursing officer in Missouri during the Civil War. Brevetted brigadier general in 1865, he again retired and moved to Fort Smith, Arkansas. His first wife and only child had died of fever in St. Louis some ten years earlier, and Bonneville married again in 1870 to Susan Neis of Fort Smith. He died on June 12, 1878.

Bonneville’s reputation rests on his expedition to the Rocky Mountains. His maps and reports provided useful military intelligence, and he was the first to prove that wagons could be taken across the Continental Divide. Washington Irving’s account of the expedition, drawn directly from Bonneville’s journals, appeared in 1837. The book was eagerly received by a wide audience; it intensified a growing interest in the Far West, supported arguments for American expansion, and provided a reliable guide for travelers. Bonneville himself spent most of his later life attempting to recapture the spirit of adventure that moved him in 1832.