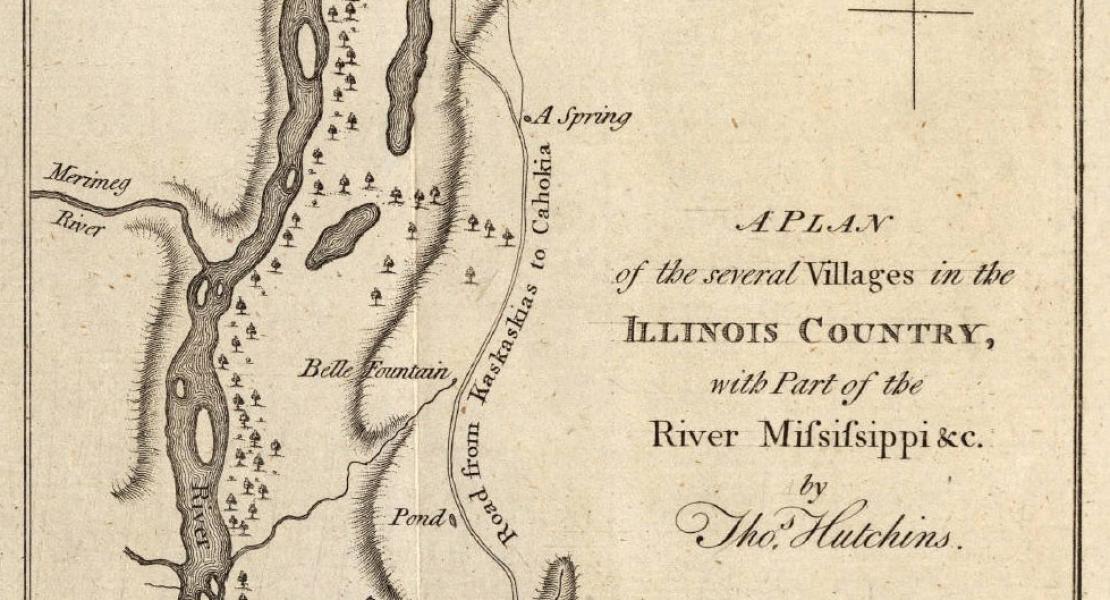 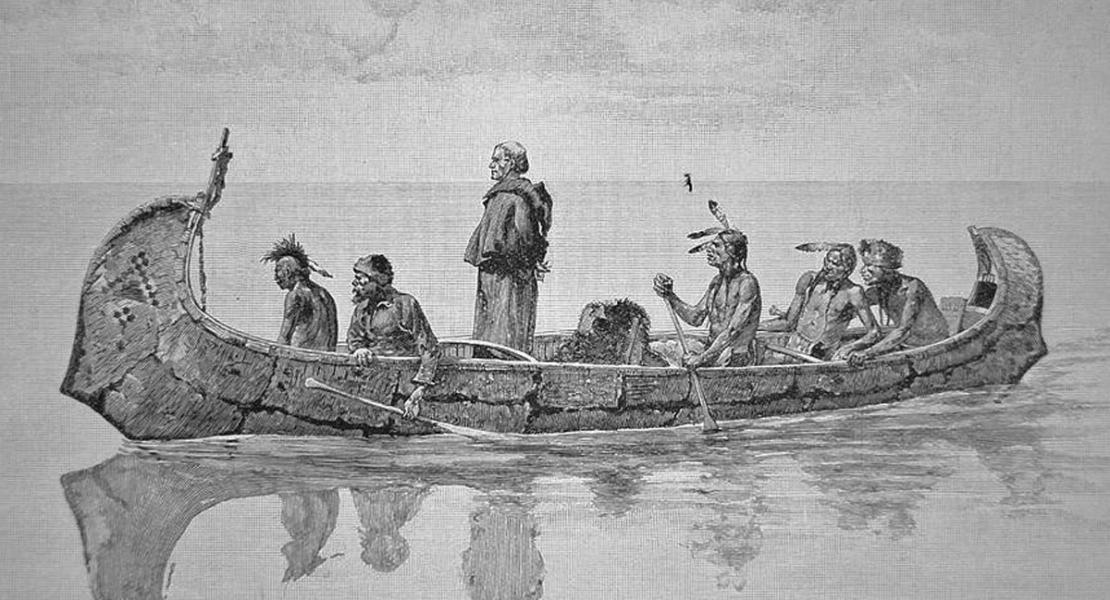 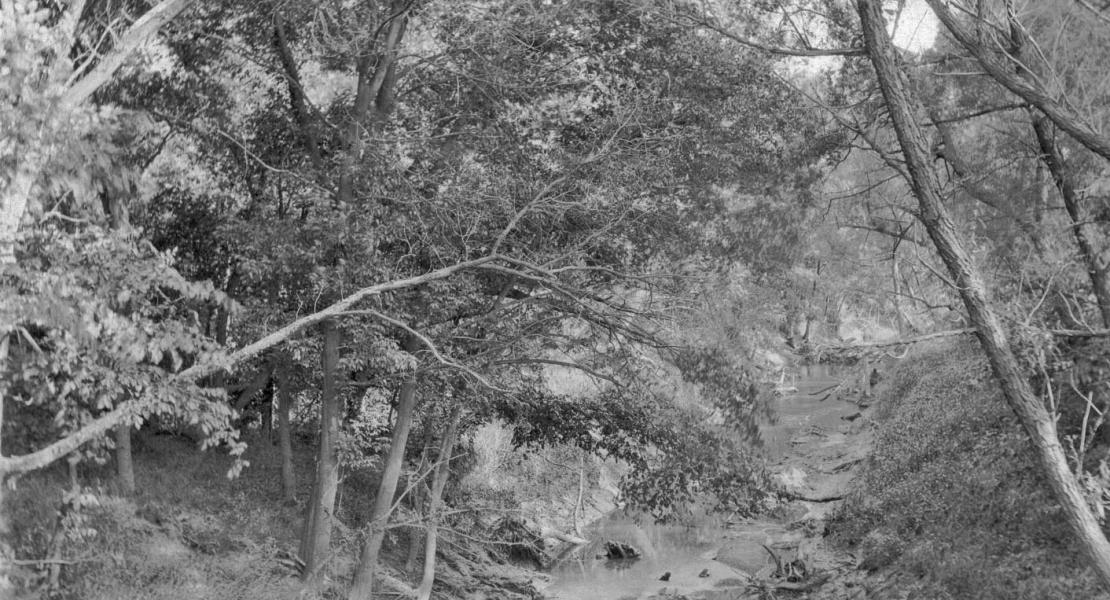 More than half a century before the founding of St. Louis, French priests established a mission on the west bank of the Mississippi River at the mouth of the River Des Peres (River of the Fathers). From 1700 to 1703, a group of Jesuit missionaries and Indigenous people, who came from the Illinois Country east of the Mississippi, occupied the small west-bank settlement. Prominent settlers included Father Gabriel Marest, Father Pierre François Pinet, and a devout young convert named Marie Rouensa, who was the daughter of a Kaskaskia chief, along with her French husband, Michel Accault (Aco or Sieur Acko).

When Marest and Pinet came to North America in the 1690s, they faced a volatile situation, fraught with tension. France and England were involved in a contest for control of large swaths of the continent. French missionaries became entangled in the struggle for empire, attempting to bring not only religion but also French culture to diverse and contentious Indigenous tribes. Some tribes came under their sway; others, like the Iroquois, were hostile to the French. For Marie Rouensa, a young woman who converted to Christianity, social change and conflict had been facts of her life since birth. Her husband, a trader and explorer who was twenty years her senior, had played an active role in the French colonial enterprise.

Father Marest first served as a missionary in Canada, spent time in England as a prisoner of war, and then returned to North America, where he accepted a post at the Mission of the Immaculate Conception at Peoria in the Illinois Country. His colleague, Father Julien Binneteau, wrote a letter praising Marest as a devoted priest who worked incessantly despite intense fatigue. Marest learned the local language in a matter of four or five months, while subsisting on a diet of boiled corn, beans, and very little meat. He also consumed watermelon, which served as his beverage. Binneteau credited Marest with doing wonders, bringing many people into the church despite meeting with tough resistance.

Father Pinet, who initially served at another mission on the western shore of Lake Michigan, provided assistance to Binneteau and Marest in the winter months. A gifted linguist, Pinet studied the languages of the Illinois tribes. Beginning in 1696, he compiled a Miami-Illinois dictionary. During the fall and winter months, he followed Indigenous men on their hunting expeditions along the Illinois River, eventually finding his way to the mission at Peoria. It is likely that he helped Marest to learn the local language, while Marest assisted him with the work on the dictionary.

Marie Rouensa attended the chapel of the Immaculate Conception and fully embraced Christianity. In a dramatic act of defiance, she refused her father’s command that she marry Michel Accault, a wild and somewhat unruly adventurer. When she asked for advice from the priests at the mission, her father flew into a rage and drove her out of his home, after ripping off some of her clothing. When she fled to the chapel, an old man saw her and gave her a piece of his own clothing. Covering herself with it, she went into the chapel and asked for shelter. In the end, she changed her mind about the betrothal and reconciled with her father, who made a public announcement that he was about to form an alliance with a Frenchman.

Marie Rouensa’s devotion to Christianity had a profound effect on her new husband and also on her parents. The worldly Frenchman admitted, in writing, that in the past, under the influence of evil comrades, he had told many lies to discredit the missionaries. After his marriage, he said he listened to his wife and was touched by her faith. He confessed to his father- and mother-in-law that he had behaved badly and made up his mind to embrace his Catholic faith. Chief Rouensa, swayed by his daughter’s pleas and his son-in-law’s example, also accepted Christianity. He announced his conversion publicly at a feast for the chiefs of all the neighboring villages. On the same night, his wife gave a feast for the women of her village. Rouensa and his family remained strong in their convictions, despite opposition from some of their neighbors.

A wave of conversions followed, resulting in a closer association between the Kaskaskia and the French and rising tensions among Christians and non-Christians at Peoria. The community surrounding the Mission of the Immaculate Conception was large and diverse, encompassing more than 250 cabins, with each cabin sheltering several families. Inhabitants belonged to various tribes, including Kaskaskia and Peoria. The chief of the Peoria rejected Christianity, creating a division between the Peoria and the Kaskaskia.

The mission at Peoria was breaking apart. In the fall of 1700, the Rouensa family and the Kaskaskia tribe abandoned their cabins and headed down the Illinois River in the direction of the Mississippi valley. The Peoria tribe remained at the mission, which was left without a priest. Father Pinet left the area and went to the Mission of the Holy Family at Cahokia. Father Binneteau died at the age of forty-six in Father Marest’s arms. Marest followed the Kaskaskia to their new settlement.

Why did the Kaskaskia leave Peoria and move to the Mississippi River valley? On the positive side, the Kaskaskia may have been lured westward by the prospect of lucrative trading relationships with new French settlements in the lower Mississippi River valley. Another attraction may have been the rich alluvial soil for growing crops. On the negative side, in the area around Peoria, the large population may have caused depletion of resources. Hostile interactions with neighboring tribes may have caused unrest. Troubles within the community, including religious disagreements between the Kaskaskia and the Peoria, almost certainly were a motivating force. Not one, but a combination of all these factors may have prompted the exodus.

In 1700, Marest and the Kaskaskia settled on the west bank of the Mississippi, directly across from Cahokia, where Pinet was serving as a missionary. The area around Cahokia was relatively crowded. Priests at the mission there reported threats and violent acts against the villagers by the Sioux. The west bank beckoned with a wide expanse of woods and grassland for hunting.

By 1701, the Kaskaskia had built a fort in their new location, and numerous residents of Cahokia, fleeing violence, crossed to the west bank. The chief of the Tamaroa led a significant number of his people across the river. In all, the west-bank village consisted of about thirty cabins occupied by Kaskaskia and about twenty cabins occupied by Tamaroa. With each cabin accommodating up to ten families, the total number of inhabitants would have been well over a thousand.

Father Pinet traveled back and forth between Cahokia and the new settlement. By 1702, Marest wrote that Pinet, a devout and zealous missionary, had left the east-bank mission, following orders from higher authority. When he moved to the west bank, he did not completely sever his ties to Cahokia. Both Marest and Pinet regularly crossed the river to keep the connection between the west-bank and east-bank missions.

There is some uncertainty about the date of Pinet’s death, but most historians agree that he died on August 1, 1702, only a few months after he settled at the River Des Peres. Up until the time of his death, he continued to work on his Miami-Illinois dictionary, which grew to well over six hundred pages, arranged by French keywords. There is evidence that Pinet died from overwork and privation. On several occasions, his fellow priests implored their superiors to send food and supplies to the missionaries in the Illinois Country. Marest and Pinet needed winter clothing, shoes, supplies of flour, sugar, salt, oil, and other staples, medicines for treating the sick, soap, candles, and other essentials.

In all probability, Michel Accault also died in 1702. Michel and Marie’s first child, Pierre, had been born in 1695. In February 1702, Marie gave birth to a second son, Michel II. Her husband’s name appeared in the parish register at the time of the child’s baptism. After that, the boys’ father disappeared from the records, and Marie married another Frenchman, Michel Philippe, in 1703.

Short of supplies and saddened by the loss of two prominent residents, most of the settlers left the Des Peres location in the early months of 1703, moved southward, and established a new home on the east bank of the Mississippi River at the mouth of the Kaskaskia River (which was then called the Michigamea River). Father Marest moved there with the Kaskaskia. Marie Rouensa and her two sons, one eight years old and one an infant, joined in the migration. In April 1703, Marest wrote, in Latin, “Ripan metchagamia vinisimus” (We are come to the river called the Michigamea) in the Immaculate Conception Parish Register.

A few of the residents remained at the site on the River Des Peres. On June 6, 1723, Diron D’Artaguiette and a party of French travelers, going upstream on the Mississippi River, “came to get breakfast at the old village of the Cahokias, which is on the left [west] as you ascend, a league and a half distant from the Cahokias.” D’Artaguiette drew a map that clearly located the settlement on the north side of the River Des Peres at the point where it emptied into the Mississippi; today the site is at the southern boundary of the city of St. Louis. In the 1760s, Clement Delor de Treget established a new settlement in the vicinity, just south of the River Des Peres. Delor’s Village was known by various names, including Louisville, Vide Poche (Empty Pocket), and finally Carondelet.

Moses Austin, the pioneer businessman, arrived in the area in the 1790s while searching for lead deposits and learned that the earliest settlement in the vicinity of St. Louis was located at the River of the Fathers. The settlement was short-lived, according to the memories of local people, because of the supposed unhealthiness of the site. The last survivors and their children and grandchildren spoke to Austin and told him the river’s name.