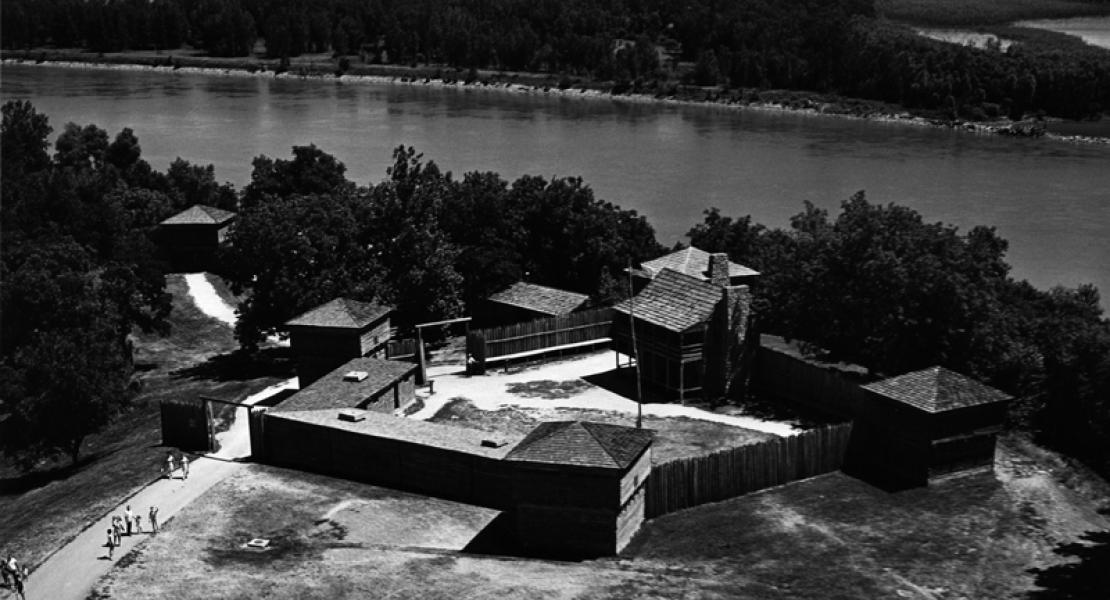 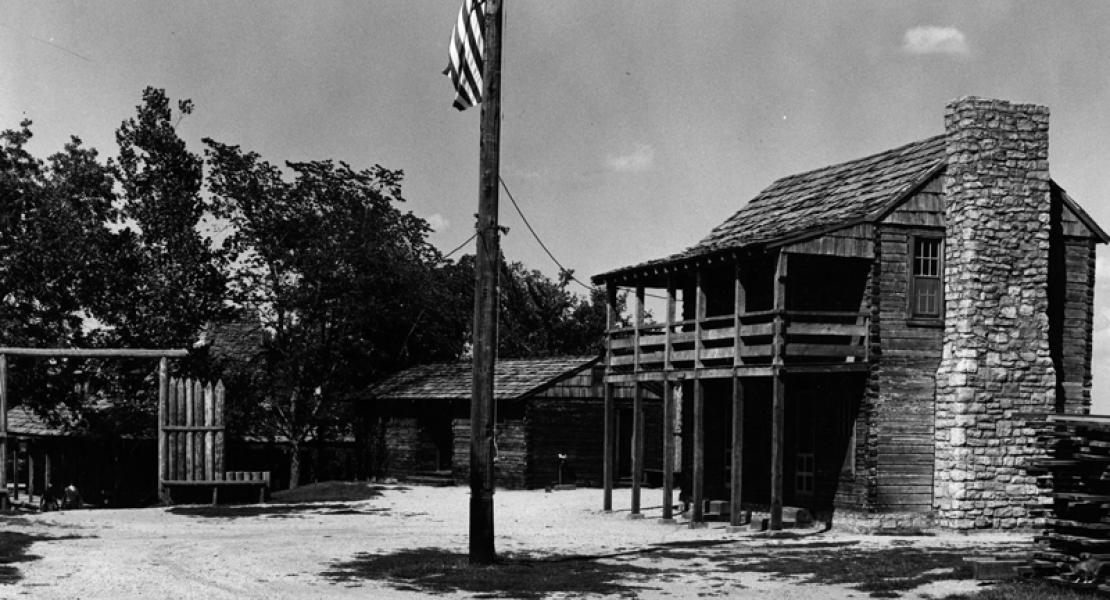 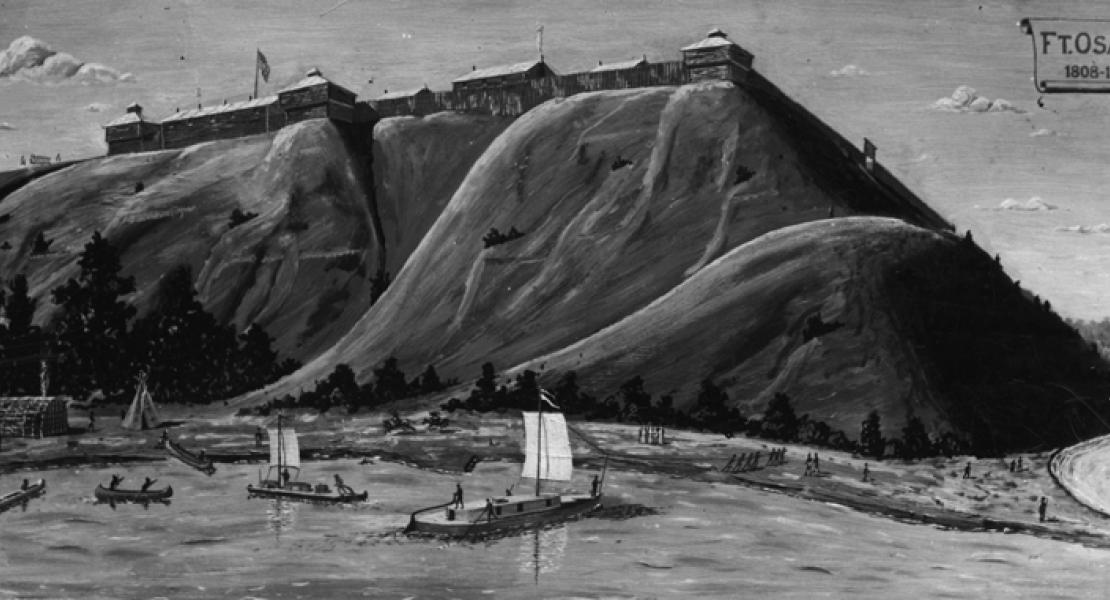 Established in 1808 under the superintendence of William Clark, Fort Osage served as a US military outpost and a government-trading factory. Situated on a high bluff overlooking the Missouri River near the present town of Sibley in Jackson County, Missouri, the installation consisted of an upright log palisade with four blockhouses, a connected two-cabin factory store with a cellar, barracks for the soldiers, and assorted other buildings. After its closing in the 1820s, the abandoned fort fell into disrepair and ruin. A reconstructed version of the historic fortification took shape between 1948 and 1961, and following the project’s completion the National Park Service designated Fort Osage a National Historic Landmark. The location also received NPS certification as a site on both the Lewis and Clark and the Santa Fe National Historic Trails.

In 1807 President Thomas Jefferson appointed Meriwether Lewis to be governor of the Louisiana Territory, and William Clark brigadier general of Louisiana’s territorial militia and Indian agent for its western tribes. After his arrival in St. Louis in 1808, Governor Lewis attempted to quell the restive Osage bands on the lower Missouri River and nearby western plains and pressed ahead with the War Department’s plan for establishing a combined trading factory and military post near their villages on the Osage River. By selling good, reasonably priced merchandise at government stores, US officials hoped to curry favor with Native American traders. Additionally, Jefferson believed that the factory system would foster commercial dependency and indebtedness, rendering indigenous people more susceptible to the American government’s attempts to extract land concessions. The US troops stationed adjacent to the trading factories provided security and protection.

Lewis tasked his partner in discovery Clark with overseeing construction of the proposed facility, which upon completion became the nation’s westernmost military outpost and its largest government trading factory. The War Department’s instructions called for the fortification’s placement on the Osage River, but at Clark’s urging the secretary of war agreed to move it to a prominent Missouri River bluff the explorer had noticed when he passed by it on his way to the Pacific in 1804. The site Clark recommended had many advantages. It was easily accessible, would place vessels on the river within range of the fort’s guns, and would enable US officials to monitor traffic along the heavily traveled stream below.

In early August of 1808, six keelboats under the command of Captain Eli Clemson headed upriver carrying men and supplies for the Missouri River installation. Eighty-one members of Clemson’s First Infantry Company were assigned for posting at the new fortification and joined the expedition. A short time later, General Clark accompanied Captain Nathan Boone’s St. Charles Company of Mounted Dragoons when they traveled overland to join Clemson and his forces at the proposed site. Construction on the facility was soon under way, and as the log structures began to take shape in mid-September, Clark dispatched Boone and an interpreter to the Osage towns to inform them of his intent to build a fort overlooking the Missouri and to summon them to take up residence nearby if they wished to enjoy US protection. A restoration of peaceful relations with the out-of-favor tribe was only part of his plan. He also elected to take advantage of the situation and press for an agreement transferring historic Osage tribal lands to the incoming American regime.

After tribal members from the Osage River towns arrived at the Fire Prairie adjacent to the fort, it took Clark only two days to cajole them into signing an agreement ceding nearly fifty thousand square miles of tribal lands to the United States in return for the government’s assurances of protection and its promises to ensure their access to merchandise at the new trading factory. The ink on the treaty was barely dry before disaffected tribal leaders showed up in the territorial capital expressing their displeasure with what amounted to a land grab. The angry leaders claimed that the treaty’s tribal signers lacked authority to bind the Osage nation to any such transfer. Their protests prompted Governor Lewis to make changes in the original version, but nevertheless the revised treaty dispossessed the Osage of vast tracts of their homelands and initiated their gradual removal from Missouri. Years later, with the benefit of hindsight, a wiser and more reflective Clark, who presided over the negotiation of thirty-seven such Indian treaties, had developed second thoughts about his role in shaping the 1808 Osage treaty. He confided to an aide that it was the hardest treaty on the Indians he ever made and if he was to be damned in the hereafter, it would be for making that treaty.

In the meantime, with work on the installation completed, the trading factory opened its doors for business. A significant number of tribal members from the Osage River towns had taken up residence nearby. The establishment, initially called Fort Clark but later known as Fort Osage, was a thriving place in its early days. Representatives of various lower Missouri River tribes came there to trade, confer with officials, or simply linger about. The factory at Fort Osage was the busiest and most profitable of all such government-operated stores. George Sibley, who served as the factor during the entirety of its operations, was in large measure responsible for its successes. A sincere and hardworking government official, Sibley managed to remain on good terms with both the Indians who came there to trade and the fort’s nonmilitary workers.

That was not the case, however, with his dealings with the military personnel at Fort Osage who served under Captain Clemson’s command until his reassignment in 1813. Relations between Sibley and the fort’s military garrison were never harmonious. While Fort Osage’s factor was conscientious and competent, he typically seemed stiff and overbearing, especially to the rough-hewn frontier troops at the fort whom he treated like servants. On one occasion when an altercation between an Osage band and a party of traders heading upriver threatened to get out of hand, Clemson and his soldiers refused to aid Sibley’s attempts to quash the fray. Sibley unsuccessfully protested their inaction, and the strained relationships persisted for the remainder of Clemson’s tenure.

Business at Sibley’s store declined as the Osage who had taken up residence near the fort returned to their old towns and private traders aggressively wooed away his Indian customers. Factional divisions within the Osage nation compounded the problems and encouraged rival tribes to challenge their dominance. In an 1812 letter to the secretary of war, the officers at Fort Osage decried the installation’s reduced state, enumerated the reasons for its decline, and petitioned to have it removed to a more secure location farther downriver. Asserting that it had outlived its purpose, they labeled it “a moth on the public purse.”

The following year, in the wake of the outbreak of war with Great Britain, federal officials heeded their complaints and ordered the fort’s closing and the trading factory’s relocation in a less exposed location. Members of the Osage nation objected to the factory’s shuttering even though Sibley reopened for business at Arrow Rock, but overall they remained loyal to the Americans at a time when many tribes east of the Mississippi lent their support to the British cause.

After the war, Sibley resumed business at the Fort Osage factory, but the installation’s days were numbered. Diminishing game and growing pressures to transform Indians into farmers gave renewed strength to advocates seeking to do away with the factory system. America’s fur moguls had long opposed government involvement in the fur trade, and in response to intense lobbying from the influential Chouteaus in the West and John Jacob Astor in the East, Missouri’s Senator Thomas Hart Benton successfully pushed legislation through Congress in 1822 abolishing the factory system.

With the ending of the factory system, Sibley closed up shop at Fort Osage and liquidated its remaining stores of merchandise and equipment. Two years earlier Fort Atkinson, situated on the Council Bluff in Iowa, had supplanted Fort Osage as the westernmost US military outpost, and the last few troops stationed there were withdrawn following the factory’s closing in 1822. Within five years the old fortification was deserted and in a state of disrepair. When Prince Maximilian and artist Karl Bodmer passed by the Fort Osage site on their way upriver in 1833, only a few ruins remained. Nearby settlers had carried off the fort’s hewn timbers for use in their buildings. The abandoned site was largely forgotten until the early years of the twentieth century, when local historical organizations sought to revive interest in the once-proud fort that in its heyday had attracted a host of noteworthy visitors, including Manuel Lisa, Andrew Henry, Pierre Chouteau, Pierre Menard, Ramsay Crooks, Wilson Price Hunt, Daniel Boone, John Bradbury, Henry Marie Brackenridge, Prince Maximilian, and Karl Bodmer among others.

Historian Kate Gregg’s publication of Westward with Dragoons: The Journal of William Clark on His Expedition to Establish Fort Osage in 1937 spurred further interest and helped propel a campaign spearheaded by the Native Sons of Kansas City to locate and reconstruct the historic structure. In early 1941 Jackson County purchased a fourteen-acre tract at the site of the original fort. Later the same year a National Park Service archaeologist initiated excavation work that uncovered the limestone fireplace of Blockhouse No. 1, remnants of the foundation of the officer’s quarters, post molds from the palisade, and the foundation of the subcellar of the trading factory. America’s entry into World War II halted further work, but in 1947 the Fort Osage enterprise was revived when Jackson County officials authorized a project utilizing the 1941–1942 archaeological discoveries and archival research to reconstruct the fort as it had appeared in 1812. The completion of Blockhouse No. 1 in 1948 marked the opening of Fort Osage Park. The remaining structures were rebuilt between 1951 and 1961. In 2007 Jackson County opened its new Fort Osage Education and Visitors Center adjacent to the reconstructed fort.