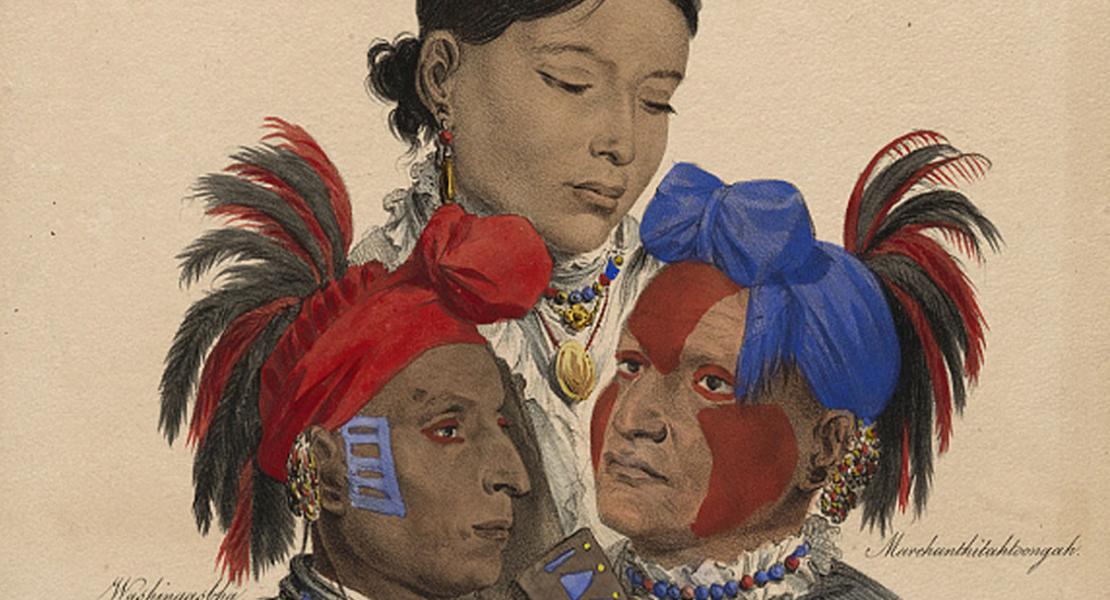 Big Soldier, a Little Osage war leader, was probably born in 1773 in a village near the Missouri River, in what is now Saline County. His Osage name is variously rendered Mo’n-Sho’n A-ki-Da Tonka (Great Protector of the Land), Marchar-thitah-toogah, Nika­ouassatanga, Manuaquida’, and Mant sa. He distinguished himself for bravery and leadership at an early age. Among the government medals requested by Lieutenant Governor Zenon Trudeau for Osage leaders in 1794 was a gorget for “‘Mauaquida’, Le Soldat,” of the Little Osage. Such recognition suggests Trudeau’s acknowledgment of the young, rising war captain. Big Soldier’s name itself reflects his status. The “akida tonkah” (great soldier or protector) was an important officer selected by the head chief to assist him in leading buffalo hunts and keeping peace.

Big Soldier played a prominent role in early diplomatic contacts between the Little Osage and American officials. He accompanied a delegation of Osage and Pawnee leaders to Washington, DC, in 1805, returning to Osage lands with the Zebulon Pike expedition in 1806. Pike appointed him leader of the Osage in the party, despite considerable rivalry between Big Soldier and another Little Osage war leader, Sans Oreille.

In 1808 Big Soldier led a party to St. Louis to return horses stolen from American citizens, a goodwill gesture to smooth the way for the establishment of a US factory, or trading post, among his people. George Champlin Sibley, in charge of the government factory at Fort Osage, considered Chief Ne-zu-­mone and war leaders Sans Oreille and Big Soldier to be the most influential men among the Little Osage during the years of the factory’s operation, from 1808 to 1822.

The rivalry between Big Soldier and Sans Oreille apparently continued during those years, for the two seemed ever at odds, each seizing any opportunity to enhance his own status among the Osage or the Americans at the other’s expense. In October 1809 a group of Osage attempted to prevent a private trader’s boats from ascending the Missouri to trade with rival tribes. Sans Oreille convinced Sibley that Ne-zu-mone and Big Soldier were the ringleaders of the trouble, and presented himself as peacemaker. Some months passed before Big Soldier worked his way back into Sibley’s favor. Sibley considered Big Soldier to be “certainly a man of good sense, but not decided and firm in his measures as many others.” Still, Big Soldier was blunt enough to chide Sibley that “the Americans are afraid of (Pierre) Chouteau and dare not oppose his Measures.”

Big Soldier figured prominently in treaty councils of the early 1800s, amply demonstrating why he was sometimes called “the Orator.” He strongly supported cooperation with the US government and generally spoke in favor of treaty agreements, though he did not hesitate to chastise government officials for failing to uphold promises made in those treaties.

While among the Osage in January 1820, Steven H. Long’s expedition encountered Big Soldier at the height of his power, leading successful raids against enemy tribes and as a major participant in the “jealousies and intrigues” then disrupting Osage affairs. The pressures created by American expansion and the intrusion of eastern refugee tribes into Osage lands undermined the prestige of the chiefs. Long reported that the Osage chiefs other than Clermont were “weak and unpopular,” while “war captains” such as Big Soldier were jockeying for control of their villages.

In his quest for prestige, Big Soldier welcomed the scheme of David Delaunay and other St. Louis promoters who planned to take a party of “wild Indians” on a European tour as a moneymaking venture. They persuaded six Osage, including Big Soldier, to make the trip. Arriving in France in July 1827, the Osage were instant celebrities, besieged by crowds and entertained by the Paris elite. By December, however, few people were still willing to pay to see the Indians. An old creditor had Delaunay imprisoned for debt. The Osage wandered through Belgium, Germany, Switzerland, and Italy, sometimes with and sometimes without their St. Louis chaperones, usually in great want and misery. They made their way back to France, where humanitarians, including the Marquis de Lafayette, raised the funds to return them home. Big Soldier and his companions finally reached their villages in June 1830. What impact the harrowing adventure had on Big Soldier’s life and status is difficult to judge, but he treasured a medal presented to him by Lafayette and in later years proudly wore it on every public occasion.

French tourist Victor Tixier encountered Big Soldier in his travels among the Osage in 1840, and understood him to be a pompous but minor functionary pretending to much greater honor than his due. The old warrior enjoyed his accustomed prominence at a large intertribal council held at Tahlequah in 1843, however, and deeply impressed the painter John Mix Stanley, who befriended him and painted his portrait. Big Soldier died in the summer of 1844, his lifelong quest for rank and prestige finally ended.

Rollings, Willard H. The Osage: An Ethnohistorical Study of Hegemony on the Prairie-Plains. Columbia: University of Missouri Press, 1995.